Get some help with creating maps or modding.
Need a map editor or other tools, look here!
Post Reply
54 posts

Inspired by Mangust's thread I figured that it would be ok to found a general purpose thread for reworks of existing bodies.

It would be a good way to keep similar posts together.

I'll start out with a set of bodies that I felt might serve as a basis for replacing the existing Collective ones. These are in their first incarnation and suggestions for alteration are welcome.

(included information on vertices and faces within images)

I think you should structure them in the same way they're structured in Warzone 2100, just higher poly.
Top

Thats because I started out with the Tiger and progressively cut down on size and made modifications to the seams to produce the Panther and Leopard respectively.

Yes I know the Tiger isn't the most faithful reproduction - Was trying to give the body series a distinctive feature to make it easy to tell apart from the rest (texture aside).

And now for the New Paradigm bodies - again a first version.

I figured that I'd again depart from the precise traditional warzone New Paradign body shapes and come forward with a set of bodies that are somewhat reflective of the bug inspiration along with the improved engine power. ^_~

perhaps it would improve the new bodies, to make more differences than just the size?
for example the bug only has 1 of those flat pyramids, the scorpion 2, like actual, and the mantis 3
so that there is a visual difference between all
Top

I have considered making alterations to those 'flattened' pyramids. In the end I settled on the following progressions (beginning from the Mantis)

I see the pistons and sweeping hull design to be representative of carapace exoskeletal bug body and wings. I considered removing the rear two piston panels but decided that turret:body:propulsion ratios would be more than enough to set them apart.

I really think that some asymettrical bodies would be cool. I'll make some work so you may see a bit of what I'm thinking about.
Top

Okay, the first of that came into my mind was tiger. No fuss about the geometry, much simplifications must be done to the model.
How about it? :rolleyes: 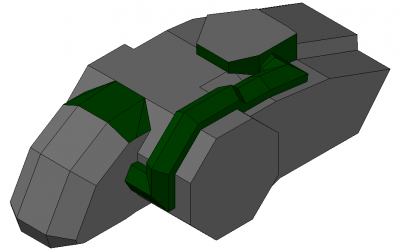 I do think that assymetry can look quite attractive - not sure if the devs are quite open to it though (if they are open to any changes at all i.e.)

No changing New Paradigm bodies - they're good as is.

Collective bodies are ugly as hell and could use an appearance overhall, however.

Actually they could use a stat overall as well. They're useless.
Top

Love the asymmetric design Olrox and think it will work-out quite well for ground units, however -

You brought this up yourself, Olrox, and i agreed at the time and still do - Vtols should have their own dedicated bodies because of aerodynamic considerations (with H2O naval bods the symmetry would be invoked for performance slicing through water instead of atmosphere as I know you are well aware of being a student of sound earth-bound engineering.

SIDE Bar for Non-Artists: Generally when an artist is asking for feedback they are asking for your impressions as possibilities or suggestions that may or may not carry much weight in the final act of creation. They are NOT asking to be told what to create as if they were indentured servants.

When you are creating in the context of a MOD you can do whatever the frack you are willing to work-out by sheer applied talent, skill, vision, knowledge and fortitude. Non-artists tend to not understand the expression *Atlas Shrugged* when it comes to anything in the world they inhabit that was first created by an individual where no such existed before that creative act (& stuff inherited, like indoor plumbing or refrigeration were originally acts of creation involving artistry regardless of their practical application. Folks like Thomas Edison or Tesla were as much artists as Picasso & Monet and then of course there are those like Leonardo whose artistry encompassed master paintings as much as breakthrough engines of war).

And by the way, the "official" canon is nothing more really than a collection of mods by way of hegemonic consensus that may or may not represent a majority in a democratic sense.

Much of what we take for granted as obvious common sense and logical today was anything but just a few generations back in time.


"Work is of two kinds: first, altering the position of matter at or near the earth's surface relative to other matter; second, telling other people to do so."

"The fact that an opinion has been widely held is no evidence that it is not utterly absurd; indeed, in view of the silliness of the majority of mankind, a widespread belief is more often likely to be foolish than sensible."

"No great achievement is possible without persistent work."

"Everything is vague to a degree you do not realize till you have tried to make it precise."

"Do not fear to be eccentric in opinion, for every opinion now accepted was once eccentric."

"Most people would sooner die than think; in fact, they do so."

"One should respect public opinion insofar as is necessary to avoid starvation and keep out of prison, but anything that goes beyond this is voluntary submission to an unnecessary tyranny."

"Language serves not only to express thoughts, but to make possible thoughts which could not exist without it."

"Mathematics, rightly viewed, possesses not only truth but supreme beauty -- a beauty cold and austere, like that of a sculpture, without appeal to any part of our weaker nature, without the gorgeous trapping of painting or music, yet sublimely pure, and capable of a stern perfection such as only the greatest art can show. The true spirit of delight, the exaltation, the sense of being more than man, which is the touchstone of the highest excellence, is to be found in mathematics as surely as in poetry."

"The whole problem with the world is that fools and fanatics are always so certain of themselves, but wiser people so full of doubts."

"Envy consists in seeing things never in themselves, but only in their relations. If you desire glory, you may envy Napoleon, but Napoleon envied Caesar, Caesar envied Alexander, and Alexander, I daresay, envied Hercules, who never existed."

"One of the symptoms of an approaching nervous breakdown is the belief that one's work is terribly important."

"Mirth is like a flash of lightening that breaks through a gloom of clouds and glitters for a moment; cheerfulness keeps up a kind of daylight in the mind and fills it with a steady and perpetual serenity."

"In all affairs it's a healthy thing now and then to hang a question mark on the things you have long taken for granted."

Yeah. At the end, I think that the best solution (the one that keeps "easy" and "efficient" at the best balance) with which I came out of that "Dedicated Aircraft Bodies" topic was:
Aircraft should be handled much like cyborgs, which do NOT have a design phase, with modular design. They should be constantly upgraded when you research new technologies, and should be listed as cyborgs do: a "ready to build" unit.

I say that because it is about bodies, maybe we'll have some nice exclusive aircraft body ideas and we decide to make them, and I really think that making them one piece, body and propulsion, would bring more plausible results.

And oh my, who cares if the devs like the idea or not? If we want to make a mod, we'll make it. Who likes it enough will install it. Who doesn't like it enough won't install it. Pretty simple, in my opinion.

I bet that whip won't say anything in respect to that, as he already said many, many things about this "Official/Unnoficial" talk. Just let's not talk about that anymore, it's off-topic, boring and unproductive.

However, we should listen to the community if we want to make something that's not restricted to please ourselves.

I think that the new paradigm bodies are interesting, but could use some detailment. No additional features, just an overall polishment to the geometry, you know.
Uhm.. and I think that re-balancing bodies would be something really apart from visual improvements and innovations.

Maybe we could make dedicated aircraft and super heavy bodies to each of the factions, what do you guys think?
Top

yes - full speed ahead - damn the torpedoes...etc, etc,... artists do what they do cause they can. xD
Top

I never imagined that this thread would ascend into artistic philosophy. ^_^ Cool.

On the Collective and the bodies:

I disagree that the Collective bodies are useless. The problem with all bodies save the vengeance is that there is no effort to balance them in part or in whole. A Nexus body is the best of all worlds short of one of the super heavies (which should really be heavy and superheavy but 'shrugs'.

I personally think that the faction bodies should entail a more significant degree of balancing (and this does not 'need' to mean equalizing but rather an accentuation of different pros and cons). I had spoken my thoughts on a potential rebalance in the Wyvern/ Dragon superheavy bodies thread.

I'd also expressed the opinion (and hence agree with Olrox) that each of the bodies should have superheavy versions (I also think that the Draconic tree should either be made a complete tree (Spark, Flame, Blaze (Wyvern), Inferno (Dragon) bodies) or removed altogether for the moment.

As for aircraft bodies - I am of the opinion that WarZone 2100's greatest strength is its versatility. That means maximum freedom in unit design. I would like to see all aspects enjoy this in the design screen - defenses, cyborgs & mechs, and vehicles & VTOLs.

This would result in dizzying possibilities but the combined use of:

This should be more than possible.

I've had to take a short break from rehashing the designs. I think I'll work on Collective Mk2 now. I personally like the Leopard, Think the Tiger could use a readjustment and frankly don't like the Panther - maybe a readjust. Are my polys too low?

Also I've been wondering - I've seen several really good models including propulsion in the design. I was under the impression that a unit is made up of 3 blender files proximated to each other (propulsion, body, turret). Am I completely mistaken here?