Discuss the future of Warzone 2100 with us.
Post Reply
123 posts

Lord Apocalypse wrote:Something every game project has on its "must have" list is developer tools. Even if its only internal, no tools = no game. Getting stratas old tools up and running should be given some decent priority so we can see more mods come out, even if 90% of them are crap it will still push new ideas into the pipe for data changes and data code side features to not only make modding better overall but the ability to streamline the process.

That's the very reason Pie Slicer and WZCK even exist in their current forms at all -- Pie Slicer, I wanted to mod Warzone graphics but felt that the 3D Studio Max plugin was out of reach and since I had experience making a few Descent models (the underlying geometry of which is comparable to WZ models) in a fan editor, and I had Visual Basic on me, I felt I might be able to create my own. Boy I did not know what I was getting into...

Same with WZCK. Troman had built a basic weapon-stats editor (WZCK 1.0 - 1.3) for modding Warzone, but didn't have time to contribute and I took over the project.


Goth Zagog-Thou wrote:Have the program use local-directory locations for the needed .dll and .ocx files, since 64-bit windows does not like those Win-98-era ones at ALL and refuses to register them. WINE, however, seems perfectly fine with them (as expected).

On a 64-bit Windows installation you must install 32-bit dll and ocx dependencies to your 32-bit system folder. People have successfully gotted 32-bit VB6 apps running in 64 bit environs out there, WZCK and Pie Slicer are no different.

For the record, Pie Slicer's conversion from VB6 to VB.Net (which took about 5 minutes) yielded a grand total of 767 upgrade warnings, at least 90 percent of which are blockers. That's over 700!


That's really all that would be needed. I can make the new .dtb for 3.1+ Warzone myself. The output changes may take some work, but nothing that isn't doable.

I'm not sure if it's that simple. WZCK already compiles all the TXT/WRF files first and only calls the makeWDG packager as a final step -- that's easy enough to option out as a separate module, the hard part is ensuring that all the output TXT files comply with the current WZ. And of course, WZCK's internal text format for storing mod info is different from WZ already. The Unit Templates section especially, where it lists a unit's turret in a separate field from sensor/ECM/etc. (because that made the WZCK Template Editor much, much easier to code).

Anyway, the big question is what repo to use. I don't see a problem with having Pie Slicer and WZCK as separate folders of a common repo (maybe we could call it 'wz-tools'?), but if they needed to be separate repos we can do that, too. I do have a SourceForge handle, btw.

And you guys will probably get a chuckle or two once you see what Pie Slicer's internal codename is. (Not spoiling the joke in advance - but what else would you do with a pie?)

Then we also need to configure a bugtracker for them. Bug #1 for both of them - "Upgrade code from Visual Basic 6 (blocker/critical)"
Strata @dA, @FAC
Top

Stratadrake wrote:
For the record, Pie Slicer's conversion from VB6 to VB.Net (which took about 5 minutes) yielded a grand total of 767 upgrade warnings, at least 90 percent of which are blockers. That's over 700!

So are you saying that it would be far easier to start WZCK 3.0 and PieSlicer 2.0 ? If so, we have infinitely more flexibility in my view than when you were developing the programs before. And you'd have help ... LOTS of help. Starting with me. I'm good at building interfaces, and I've been looking for a reason to really get my hands dirty with code.

We could make them cross-platform from the get-go, too. QT would be a good foundation & is cross platform, but I'm not sure it can do everything needed until QT5 hits later this year(?). VB.Net can be done using Mono Develop, which is cross-platform. I've helped Flail with FlaME's Linux compatibility in the past, so I'm pretty well versed on what is needed to get VB working on 'nix.

Anyway, I digress. The choice is yours, Strata. I'll help you as best I can either way.
Top

One of the big things to keep in mind is how Pie Slicer needs a 3D rendering API - DirectX (current) or OpenGL (possible).

At this point I'd say there's no difference between attempting to migrate code and rebuild from the ground up - either way, it's a LOT of code to get working. The GUI definitely needs a redesign, but ... one thing at a time, trying to do both will only result in headaches and wasted time/effort. In Pie Slicer's case, a lot of the build issues are related to its GDI rendering ... which is a fairly clean conversion, but only AFTER applying the proper graphics buffer infrastructure behind the scenes.

For example: On the main window alone, Pie Slicer uses five back buffers - one to draw the connector stars, one to draw the structure compass, one to draw the keymapping, one to draw the actual model's wireframe on, and the last one is an intermediary buffer to assemble everything on and render some final overlays (like the current point/polygon) before it's actually displayed to the user. The reason it became so convoluted in the first place was to keep the interface rendering smoothly on a 400MHz box.

The Textures window also uses its own back buffers - one to draw the texture grid on and one to overlay the polygon texturemaps, again all before it's actually rendered to the window. The texture itself was migrated to a DirectX surface ... I think.

VB2010 is having some issue displaying the master window in design mode - the form designer is itself tossing an exception. That's definitely a problem, and I don't want to deal with it until the tool is under some version control.

In the meantime I am trying to nail some of the low-hanging fruit such as merging Dim statements with their subsequent initialization and migrating some of the string handling. But I also have to make up for that aforementioned "date" which soured out yesterday because I couldn't focus with all that programming on the brain. Need to go clear my head (not soak, just clear) this time.
Strata @dA, @FAC
Top

I hear ya. My head gets to aching just from trying to get Cam 4 working on 3.1+ Warzone.

Do what ya need to do, bud. There are no timetables and no rush, except what we put upon ourselves. (I believe Rman said that once hehe..).
Top

Check out Qt creator and see what you think. There is an online installer around 15mb or offline installer 1.7gb for the full SDK. Its well worth it and Qt supports OpenGL so its perfect. For just modeling new pies I see no reason to wait for Qt 5. Now if you wanted to write a game in Qt... thats a reason to wait.
Top

If intended to push your manpower into a qt app look at wmit its a nearly made viewer mayhaps its useful!
Top

I think first we need to see what language strata is most comfortable with. VB or C++. Then we can decide on what to push for and how to go about getting everything setup.

@Stratadrake I have a git repo and svn repo up. Pick your poison and PM your SF.net username to me and I will add you on to my project.
Top

Goth Zagog-Thou wrote:I hear ya. My head gets to aching just from trying to get Cam 4 working on 3.1+ Warzone.

Do what ya need to do, bud. There are no timetables and no rush, except what we put upon ourselves. (I believe Rman said that once hehe..).

Do it for the joy, the personal satisfaction, or don't do it. And when you do out of joy, you savor it. Imposing deadlines from external sources, that have no relation to that joy, is a sure fire way to create a kill-joy. That's how I approach it, anyway.

Lord Apocalypse wrote:I think first we need to see what language strata is most comfortable with. VB or C++. Then we can decide on what to push for and how to go about getting everything setup.

I think for now I would like to avoid getting lost at C. I can generally navigate my way around the icebergs, but I don't have much in the way of "C legs" so I'm not good for much else beyond swabbing decks. ( ...sorry for the puns; they were inevitable

On a sidenote, when I said I had "a date with a fox", I meant this fox. He'd been sitting uncolored in my sketchbook for far too long....
Strata @dA, @FAC
Top

I had a date tonight too .. with QT Designer. 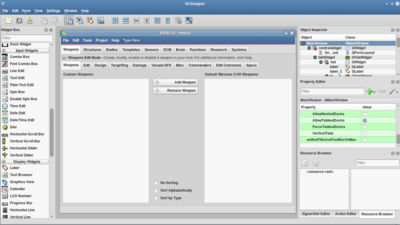 Took me maybe 20 minutes to build it. Something to tempt you, perhaps ...

Or just another example of me messing around. Hehe...

Not bad Goth. Creating a UI in Qt Creator/Designer is fairly easy. Even the C++ code for Qt is fairly easy if you follow some of the tutorials and examples.
Top

Yep. Couple of days and I'll have the entire WZCK interface cloned using QT, if left to my own devices.

And please remember that I do this sort of thing for inspiration. I cloned FlaME's interface like this too a couple months ago.

[EDIT]: It just occurred to me .. I need to blame thank Emdek for getting me hooked on QT.

The facial expression is compelling, the eyes in particular. I see character in them. I'm anthropomorphisizing but from the novel reference that is the goal, me thinks.

And here I been thinking the original ref to a date with a fox was about a babe encounter.