by Goth Zagog-Thou
Thus far, Campaign 4 has 3 maps and 14 missions. By now, enough of you (I hope) have played through the Milestone Releases to get the general tone and situation of what this Campaign is about.

We really need some more things to do in the Campaign. We need more maps and mission ideas. Every release has had the .fmap's included so that derivative works can be produced. Even if it's an idea for a single mission on some under-used portion of the map, we want to hear your idea. There are a ton of (currently) unused maps that could be reworked.

Release-8 is coming soon, and things have been tweaked/re-tooled in such a way that can accomodate added missions / map ideas. Think the Nexus Base fight can be done better? Please speak up. Is Mission 6 boring? I couldn't agree more.

by hjhjhj
Could you place a picture of the map it should be in? I read on the other thread, that some missions only covered 70% of a map, you wanted 90%.

Also maybe a picture of some maps you have already, or some you think would be easy to add stuff to.

Give us some hints of what you would like or what could make stuff more easy for you to work with... that could guide us *thinkers* (

) more easily through the process.

Edit - Campaign was really tough for me to get through because of my lack of patience.

Also a reason why i have not played your campaign yet - it is not finished and that bugs me!

Hence the request of the map.

by Goth Zagog-Thou
Sure thing. 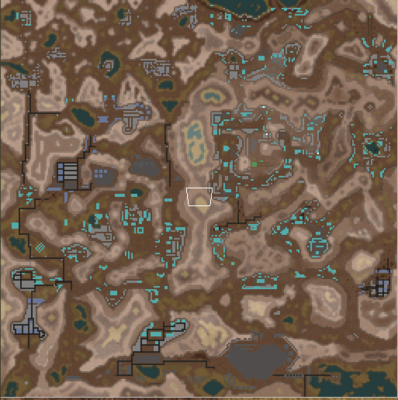 As you can see there's quite a lot of space that can be used. For example, the bottom left corner south of that Scavenger Base used in M4 (Node Base #3 southward) all the way to the western edge of Nexus Base can be reworked for something better. Likewise, the bottom right corner up to Node Base #1 (and that entire M3 south area), just past the Landing Pads at the east side of Nexus Base. And then, everything north of Node Base #2 into the Mission 6 area.

I'm not happy with Mission 6 at all -- but it's an important part of the story. I think that whole quarter of the map can be done better. The end result for any mission using that area MUST be that the player ends up in an alliance with the Scavengers. It sets the stage for everything else that comes afterward.

by lav_coyote25
what size is that map.

by Goth Zagog-Thou
250x250. I blew up the minimap in FlaME to 512 to get a better screenshot. The proper name of the map in the 'uncompiled maps for reference' folder is 'Cam4MainMap_Arizona'. The 1000x1000 .fmap file is something I'm using as a main reference for everything.

by Goth Zagog-Thou
I should note that there are some changes to the main map compared to the last release version. Mostly asthetic and game flow. The new release will be ready soon, I'm still working on M9's script. It plays but it dosen't do a whole lot yet. I could probably make sure it works and put the release out tonight.

by The Dominion of Duat
This is more of a storyline idea, but i was reading this fan fiction of warzone and when i saw this post i immediately thought about what i had read. check it out. http://www.angelfire.com/falcon/stratad ... ramez.html

by Emdek
Goth Zagog-Thou, I'll need to test how your storyline could fit into my ambitious idea of 10 campaigns in total (yeah, extremely optimistic, but for sure doable, for mkaniacs

), one prequel and two additional trilogies (in similar manner of current one).
Also, you should come back to IRC, as hopefully soon (like when 3.1 will be marked as official stable) the work on campaign scripting redo will start.

by Goth Zagog-Thou
Looks like that's what will have to happen for the Campaign to get back on track. The scripts are pretty much useless as they are, at least on Windows systems. Nix has no issues loading them -- but as the user base is primarily on Windows, it's a deal-breaker.
All times are UTC+02:00
Page 1 of 1
Powered by phpBB® Forum Software © phpBB Limited
https://www.phpbb.com/