Per wrote:You have a palette.txt somewhere which is too short being used instead of the official one from master. Perhaps AR has its own piepalette.txt?

Yeah, we use a different adjusted palette with a more darker teamcolors.

New stuff:
-Cyborgs: normal and super cyborgs complete with leg animations
-MaNGusT's models have been converted to use object space normal maps, so you get to see them in full detail
-New lancer & truck models by MaNGusT
-New school bus model
-New minipod explosion and smoke fx by MaNGusT
Last edited by Jorzi on 01 Jan 2015, 11:47, edited 1 time in total.

Thank you all at the AR team for the wonderful work you do, you are irreplaceable and needed there - keep it up! I Happy new year

Wow, just wanted to say thank you for doing such a fantastic work Jorzi and all the amazing designers/modders from Art Revolution, i can't wait to see all of Warzone 2100 in HD! Every single model is absolutely brilliant and above all, true to the lore of WZ. Keep it up!
Top

Are the animations in the current models going to be in the new models as well at some point ?
/facepalm ...Grinch stole Warzone

@Vexed: what animations are you talking about specifically? We've been reusing the old .ani files because generating them by hand is quite complicated.

Thanks everyone, always glad to hear that we're making a difference

The spinning fans on the tank factory are missing.

themac wrote:The spinning fans on the tank factory are missing.

texture animation is a price of normal mapping support

Yes, the missing fan animation, and the missing smoke puffs.
A shader could recalculate the normals...
/facepalm ...Grinch stole Warzone

Guys, can you update the thread title and the initial post to reflect the latest patch?

I actually downloaded Alpha 3 and used it for a while

EDIT: And thanks for all the hard work of course!
Top

@Vexed: Ah yes, the smoke puffs, I must have forgotten to place the connector. Fan animation may not be as trivial, though

Using another pie layer for the fan and making a simple .ani file would probably be a smarter alternative, but I can try to get the animation working as long as pie3 supports the appropriate flags (no fun editing those, involves manually finding and flagging the correct triangles in a text editor). Since each frame requires separate texture space anyway, normals can be baked per frame. As a side note, we're using quite huge amounts of texture space here at art revolution.

@wuz21m: Unfortunately the first post is no longer editable, but thanks.

Was talking in -games about this mod, and they really like the buildings, but, for the units, it is hard to tell them apart compared to the old ones.
/facepalm ...Grinch stole Warzone

vexed wrote: but, for the units, it is hard to tell them apart compared to the old ones.

yep, mentioned it too but only at high zoom, at medium zoom units look almost clear. This problem appears only with small weapons like mg, twin-mg, hmg, light and medium cannons and may be some others. I think we could do something with it, i.e. adding more conrast and and saturation to some parts, removing noisy colors and camo.
From your side, would be good to return the original zoom values. Not much rts games have such high zoom, but if have then units have simplest geometry and flat coloring.
Btw, with lowered zoom high-oil maps would not be that playable, but this type of maps is not the "original" wz, you know... I mean, that when I launch wz with armod, I just want to play the original game but with updated graphics. I don't need altered zoom, I want back removed sandy mist that you don't bother to return, I want that terrain particles will be shown in its original size without cutting 8px from sides, I just want back all things pumpkin had created carefully.
In conclusion, if people want to play at high(not original) zoom or play on high-oil maps, then they should use a special mod for it. Such thing should not be enabled by default. artist's imho.

MaNGusT wrote: I just want to play the original game but with updated graphics.

Yes-thats, what i also want to. My problems are not the units. I have problems with the hardpoints.(especially on red Arizona terrain) The wallstructures are very good. But it is very difficult for me, to find differences between the heavy MG-Hardpoint and the light cannon hardpoint. It doesn`t matter whether you use shaders off or on. This screenshot is a normal and often used zoom. But it wasn`t much better earlier with the light weapons on hardpoints 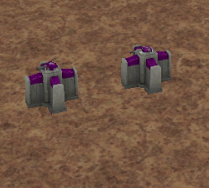 In case the WZ-game ends in a draw , the game winner will be determined by penalty shoot-out.
Top
Post Reply
221 posts