Did you create a mod, map, music, or a tool? Present them here and earn feedback!
Note: addon requests do not belong here.
Note, everything uploaded to this forum, MUST have a license!
Post Reply
333 posts

Iluvalar wrote: I
your first move - research and make something.. in this time you know nothing about enemy's plan. you can scout, but enemy closed his base and you only can see last produced cyborg with MG.

So i successfully scouted walls. right ?

NRS+V50
*Debt system now make your building explode if you dont pay. Avoid to be under 0 when you already have 5 banks. Your factory should explode just before the absolute bankrupt (saving you from total lost, but you'll see it like an assault I dont know why ^^). There was a kind of cheat to continu to spend even further.
*For the first time, I changed the weapon modifiers. I felt cyborgs were too much "cartoonish" while other propulsion were more subtil. So I have normalised the standard deviation to 30%. Modifiers are proportionnaly kept intact for now. But i'm realising that the propulsion are all sort of on a single dimention cyborg=>hover=>wheel=>htrack=>vtol=>track. I believe it would be incredibly more interesing in a sort of triangle instead. (this would be a enormous change... idk...).
*I played with the bodies heaviness again. Sorry ^^. light a tiny bit heavier and heavy SERIOUSLY heavier. Some weapons being so much expensive (laser, rails,etc.), they need that kind of super heavy body.
Heretic 2.3 improver and proud of it.
Top

Hey I suggest you implement peace time in NRS

i have new variant how peace time could be implemented

There is already a peace mode in the mod

and it's player dependent. Each players can chose if he want a peaceful base or not.

. But it cost 70% of your budget. And i made a very interesting spin off with that, because when you invest a long time in peace and your opponent dont do it, you win out of a peace victory \o/. Except "peace" is spelled "WAR" and the investment is called "units" lol.
Heretic 2.3 improver and proud of it.
Top

Dont confuse suggestion.
I suggest good things. So you dont want to include peace time.
Top

more seriously I dont really see what we would really win with that. The building time of your base is 5 minutes and the research tree is already so fast and compressed that you can access half the components of the game with an omega lab and a bank that way into this 5 - 7.5 minutes. The mod is tuned so the first weapon have just the time to come in existence in the game and make an attack before they become obsolete. So as far as i'm concerned, adding any minute to the build time would cut that same minute from all the research lines.

Any good player would delay all his production and rush in new components researches at this pace the old units get obsolete each 2 minutes. After 10 minutes, a team would come out with a double tag dragon on track IV design. And the research game would already be over. So i dont get why you ask peace time ?
Heretic 2.3 improver and proud of it.
Top

you know is hard for me explain my position.
i just suggest you think how make more fun, not about how make all balanced with all
i have a lot of reasond WHY
- easier use artillery, mass vtol asault, tower defense
- prevent rushing
- if both team have noobs is impossible get dragon in 10 minutes.
- peace time is noob friendly

how units can be obsolete in 2 minutes?? in most cases better make more units and finish attack than stop attack and research
Top

Reg312 wrote: - if both team have noobs is impossible get dragon in 10 minutes.

After more detailed look it end up that the heavy bodies have 8 bodies and the cannons have 7 components. The step and interest rate modifier look like they hit us a little more than i tough and prevent us to reach the dragon so soon. However i reached the hellraiser (5 components) in 14 minutes without any banks. ALL BY MYSELF i could be in a team of 3 total noobs that dont even move, i'd reach the end of the tech tree anyway.

I believe it proves that we can reach the end of the tech tree really fast if we know that we are safe to spend 100% of our oil into research.

That is called a failed noob stomp. When the opponents are willing to send their armies into a well managed defensive structures. But you are too defensive to just kill those noobs and start with a better team setting.


how units can be obsolete in 2 minutes?? in most cases better make more units and finish attack than stop attack and research

The standard progression of the game is now 173% for 20 minutes. But this is for one line. since the three component lines (weap,body, propulsion) are multiplicative, you end with a model 5 time stronger each 20 minutes. But of course, you dont need that much to make the old model dubious. For me a model become obsolete when the new one can outcome a bad weapon modifier (which is now fixed to 30%). Like a cannon tank that can beat cyborgs for the same cost. If you spend it 3 lines simultaneously, it happen in less than 3 minutes. This mean that if the build time last 3 minutes.

Why i should prevent that ?

i said about game option, you respond as though i suggested to make all games with this option.
Theories of WZ-game is not intresting for me. Im more instrested in player's feelings.
i think is impossible take into account all factors. so if you set parameters by random is will be same balanced

I am a little kidding but is really no matter 14 minutes or 100 minutes to get hellfuck howitzer
Expensive and varied research this is what makes NRS funny!
obsolete or not obsolete. it looks like you want to make game standard and monotonous for all situations
all that i suggested - make another variant how people can play!

That is called a failed noob stomp. When the opponents are willing to send their armies into a well managed defensive structures. But you are too defensive to just kill those noobs and start with a better team setting.

this is way how WZ can be played, when 1 team forcing attack tactics while another team defend.
Top

You should understand... you were complaining the last weak that you cant scout easily and you have no many time to adapt. But now you ask me to prevent the scout for another x minutes ? When the build time of 10 minute will be over, one of the team will have a random but tremendous advantage on the other. The "game" might end there. And half of the tech tree will be over. I'm sorry but i'm 100% sure the BT will break the control mechanism in the mod. The game will be random non-sens. It look to me a total waste of time to insert that in the game.

However, since you know how to script. If you dont rely on my saying and want to see by yourself how much the game collapse with a BT, I'm willing to introduce your function in the rules script If you make it.

If both spend the same power into the fight, the turtling player with always have an advantage of about 250% <= that was stolen from standard balance dont ask me... However in NRS that 250% have very few chance of reducing over time. Of course the attacking player will look for weakness (avoiding 1/2 of the defense) and unfinished sections and use them to make the turtling player pay his fair share of the war cost. But it might not work if the turtling player have a peace time long enough to close the walls. The attacking player would fail. However there is a third option you fail to see : a researching player. That would only pay defense enough to counter the mobile attackers of the turtler himself. Forcing him to attack. And spending all the power saved into better research. That's the solution there.. not to suicide more units into the walls.
Heretic 2.3 improver and proud of it.
Top

NRS+V51
*Crab told me that I was making little sens that the vtol was resitant to flamer. When Trying to normalize the modifiers, it was ackward. So I have edited them more manually.

NRS+V53
*Major bug fix causing crashes when building some defense structures. It look like some bugs are there just to haunt me. ^^
*The research, production and engineering upgrade now follow the figure count function (the one that say that 2 tanks together worth 3 tanks in line. After the success I got using that method for X2 and X3 lab it became clear it was the best way to calculate it. Those research will be a lot more agressive than before.
*I've been a bit less harsh with the power cost of the special lab (90%->80% of constant usage). But just to make sure everybody understand : you and all you teamates MUST find a usage to the researches you got before the 3rd research. Or else you lost some power somewhere. At the 3rd research you could as well had 3 standard labs researching together and have the same results.
*I have reduced the cost of the first enginering upgrade so you might find a way to trigger it during you opening sequence. After that "first step" the other research will only last 30 minutes. So you'll get them a bit faster as well. Those change dont change the balance progression, so you'll get less effects. But maybe at better moment (opening (mk1), start of massive defense production (mk2), unleash the enginering power! (mk3))
Heretic 2.3 improver and proud of it.
Top

NRS+V54
*Borg factory doubled. both speed and cost. With 3 modules the standard factory was incredibly faster than the cyborg creating situations were you cant produce enough borgs. Now the borg fact. come with it F2 module. If you want to see it like that.
*New lab called the "infinity lab". it is to standard lab what standard lab is to x3. Once you built it and filled it with the first research, it will produce it own energy. Making it running on it own interest (providing you dont spend the energy elsewhere). It is theorically close to the nuclear reactor in term of production/investement. However considering the cost, it will be extremely fragile. It might be a questionnable building, but I made it principaly as a mirror to the x3. To make players maybe understand that the x3 lab is not better but only different.
*Another new lab called "paradox" is at x.5 . Hence the name ^^. It work exactly like the infinity lab, but since it need half the energy, it will also cost half the price. It resistance look close the infinity lab.
*The research module is also fixed on the same research function now.
Heretic 2.3 improver and proud of it.
Top

NRS+V55
Nobody will love this one. But it is reg312's fault. lol.
*Power generating buildings (derrick and pgen) have been autobalanced. I needed to play with their stats and reduce their resistance to be able to give you an abordable building... derrick is 10$ and pgen are now 20$. I'm not sure the pgen will be usable as a wall anymore. Those structures will be a lot more interesting to target than before.
*starting power is affected by this. BUT you will end at the same point. After the base construction.
Heretic 2.3 improver and proud of it.
Top

Hmm. Just tried to download the mod, but failed to see any V55 here 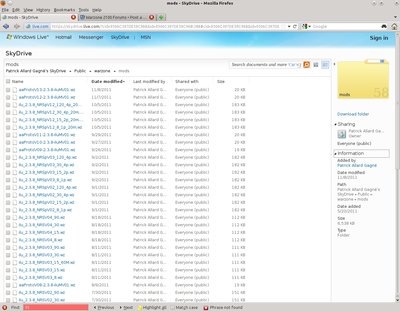 I just take orders for now. you can see the last version in the lobby however. Wait I'll post a challenge for you

Heretic 2.3 improver and proud of it.
Top
Post Reply
333 posts