Did you create a mod, map, music, or a tool? Present them here and earn feedback!
Note: addon requests do not belong here.
Note, everything uploaded to this forum, MUST have a license!
Post Reply
5 posts • Page 1 of 1

I made a new randomly generated map (similar to Entropy and WaterLoop). It's called DustyMaze. The generator generates random mazes using randomized Kruskal's algorithm which has bias towards shorter tunnels and more intersections. It appears to offer a lot of strategic variety. The map is symmetric, suitable for multiplayer. I made three variants so far: a central-symmetry 1v1, a central-symmetry 4-player map, and a mirrored 2 vs 2 team map.

License: CC0
(from the xplayers.lev file)

Yes it's intentionally CC0. Should have mentioned it!

Some examples of generated maps: 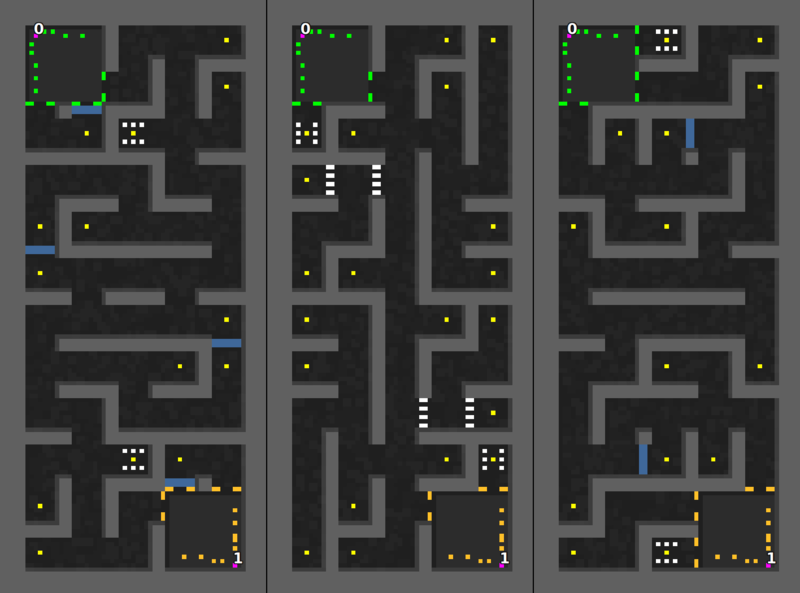 I had a fairly productive discussion with Iluvalar who educated me about the intended shapes and sizes of maps for competitive multiplayer. This resulted in the following slightly different 1v1 map, shorter and wider than my initial attempt. It guarantees two chokepoints - 9 tiles wide each. It has rush distance typically in range from 1:10 to 1:35 which is, as far as I understand, on the large-ish side but acceptable. It also eliminates the situation where both chokepoints are at the center which typically leads to unnecessarily increased importance of center control.