You really need to alter the behavior of trucks.

They are madding compulsive, and suicidal.

For example, if a enemy tank pounds away at wall, the truck will rush to that side of the wall to be killed by the enemy tank.

Truck Engineers can't sit still. All the time moving. They move faster then you can right click, and say hold position.

At times, it seems hold position does not even work.

They commit treason too.

As a enemy tank, pounds away at the wall near a gate, the truck will come out , and let that tank in.

Send that truck to prison for a hundred years!

Is there any fast fix to this?

Like a mod, or modify the AI script, or something that can be done?
Top

You are talking about 3.2 correct? I noticed there is auto behavior on trucks, repair units and CB sensors.

Sometimes the auto behavior on trucks is desirable, the trucks are smart enough now to help other trucks building in their vicinity. The trucks will repair anything around them but this can sometimes be undesirable when your base is under siege. I think this is the case you're talking about. This might be a good opportunity to add a new unit menu icon - the ability to turn auto behavior on/off.

The real reason I made this post is because I just observed the same behavior with the CB turret. If artillery is firing around a CB droid, the droid automatically runs into the artillery and overrides human control. That's the only odd part.
Top

Did not know that a new version had came out.

I have given up on warzone 2100 because of these trucks.

I have a trick, so trucks can take out defenses by building a defense structure against the defense.

It only works good, if the trucks don't squirm.
Top

The repair behaviour has a range of 5 tiles if the unit is not on 'hold', and I don't think this has been changed in 3.2. Is this too far?
Top

Does "hold position" still work, after you have told the truck to move to another position?
Top

I have the exact same problem my trucks will open the gates, and sometimes even go outside, letting in packs of cyborgs. I'm starting to think I should just put walls in place of gates, and take them down when tanks need to come through.
Top

I came here hoping someone had a strategy guide or a behaviour fix for this issue.
Do people discuss building strategy like this? I'd be very interested to see how people construct effective fortifications.

As Minefake said: I find it easier to just never research nor use gates in 99% of situations. They are just a guarantee that I'll suddenly be overrun.
However I have recently found *one* situation where they seem to work against bot behaviour. I'm sure they would instantly fail against a human opponent though - note the gates are on the right of the image, against the out of bounds space. 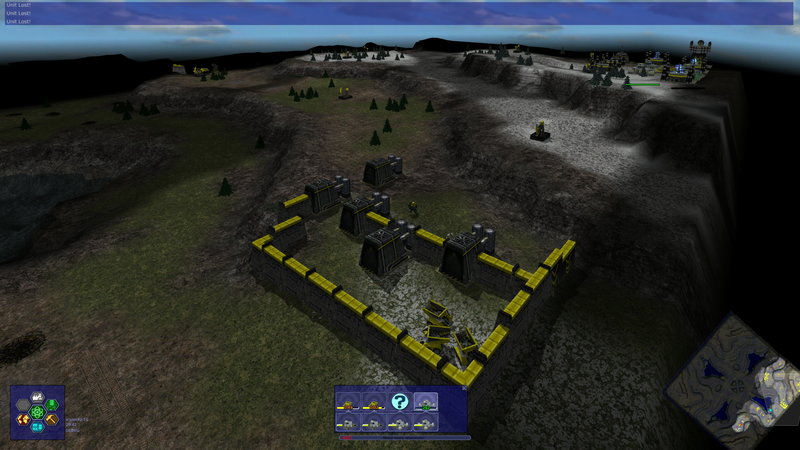 note the gates are on the right of the image. Because these are several squares deep in out of bounds space a bot will never go there. That said, I could probably leave the wall entirely open in the same place and a bot would also never get through either.
Map is visionx2