Tutorials for replacing the fastplay mission


Rman Virgil wrote:Cool. I'll go through my archives. I have tons of scenarios in various stages of evo. I'll pick-out a couple & post'em later.

I'm looking forward to that. your stuff is usually pretty good.

To get the ball rolling -

If I recall milo, your idea was to create CAM style challenges that are post original campaign. Makes sense. An opportunity to increase difficulty in fresh, creative, captivating ways.

What follows is a basic framework for constructing missions that are post original campaign. The name Team Delta was picked because I think it's RL associations fit the concept of Mini-Cams. Others will likely come up with different (but still viable & generative) foundational narrative constructs.

"After defeating Nexus in the northern sector, a powerful artifact was discovered inside the ruined base. This artifact contained blueprints for a 'Satellite Up-link structure'.

"Our scientists were able to research it and construct an uplink center near Project HQ. This allowed us to access satellites and download images taken from all over the world.

"Photographs of our continent revealed ruined military bases, cities, scattered scavenger settlements, and the extent of damage inflicted at both Alpha and Beta bases.

"One photograph from a Caribbean Island chain revealed what looks to be pre-collapse missile silos. These should be dormant and show no activity..."

"We have already dispatched a transport convoy south eastward to investigate. However, their transport has run into trouble."

"A distress message was sent moments before contact with Project HQ was broken."

"Project HQ, advance team Delta reporting. We've had visual contact with enemy strongholds containing the missle silos but have taken extensive damage and are trying to put as much distance between us and the enemy before touch-down. We won't be able to keep the transport airborne much longer. We're sending our coordinates now, but we need --"

I'll post details of a possible Mission sequence with some innovations - stuff not used in the original campaign - in the next day or two. (I have to strip-out any too map-dependent references and re-construct accordingly.)


milo christiansen wrote:Unfortunately I suck at making asymmetrical cam style maps so most will be nothing but the scripts and a test map.

Rman Virgil wrote:I have an idea, based on recent experiments I've been doing, that may be of use. I'll put it in your other thread.

Below is a Map Preview of a totally asymmetric map I generated in Diorama.

Though I like building my maps from scratch and think I'm a better at it than Diorama - I am still VERY impressed by what Diorama can do. It can make more artful maps than most actually.

But more to the point... this exercise has been revealing about Diorama's usefulness.

1.) The map below I would never have conceived and it's a really interesting map.

2.) In looking over the map to modify it to my own style (which has resonated it would appear) and build-out the details, the basic lay of the landscape actually gave me ideas for Mission-Challenges ! Amazing. An example of bricolage artfulness and creativity being bi-directional.

(Note: Changes have to be made to Diorama's type dinit.bjo because for some reason it is unknown to flaME so that you cannot directly bring in the Diorama map.wz for modifying in flaME... out-of-the box, that is. The solution, for the moment, is to replace the Diorama generated dinit.bjo with one generated by 32EW or flaME. The game binary recognizes both types dinit.bjo. Weird. Weird in that I do not understand the "why" of any of it but still figured out this quickie work-around.) 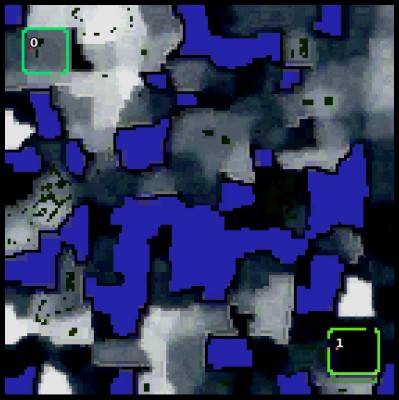 Sounds cool, except for one thing. My plan is to create one mission then make a bunch of non map specific abstract scripts for other modders to use. These scripts would be a frame work for making specific missions, so I am looking for more abstract ideas. I don't want my scripts to contain any specific story. For example a set of scripts for transport missions in which the objective is to rescue a downed transport is good, I'll add it to my list, but the specific story and map is for YOU (and others) to implement. The mission that I wanted to make is almost done, after that I plan on just making support scripts for others.

The "configurable enemy AI" will be the hardest scripting challenge for me yet, but I think I should be able to come up with something that works OK.
In general, if you see glowing, pulsating things in the game, you should click on them.
- Demigod Game Ganual
Top

Oh, I see... & understand now. You really are gonna empower many folks to make mini-CAMs that would otherwise have never even attempted such a creation.

In essence you're modularizing the process - impressive.

The "configurable enemy AI" will be the hardest scripting challenge for me yet, but I think I should be able to come up with something that works OK.

Maybe consider VTOL Sorties in that mix - if you haven't already, that is. I suggest that for a number of reasons.


BTW: On the "a rescue downed transport mission", a capsule summary of some interest: scripting the Transport (& Units aboard) to spawn, at mission start, with various percentages of damage, necessitating repairs; scripting combat units to have various ranks; that one of the units is a ranked Commander that has to be preserved as a condition of victory and that instead of receiving a "Mission Failed" (that would end the mission right then and there) the enemy A.I. is scripted to go "Postal" and the player can go down fighting heroically to the end.

Rman Virgil wrote:and that instead of receiving a "Mission Failed" (that would end the mission right then and there) the enemy A.I. is scripted to go "Postal" and the player can go down fighting heroically to the end

As for the win conditions, I am working on a way to make them easily configurable. My goal is to make scripts that the average modder will never need to touch, just modify the vlo to mach your map and story.
In general, if you see glowing, pulsating things in the game, you should click on them.
- Demigod Game Ganual
Top
Post Reply
20 posts