Challenge: Back to Basics

Challenge: Back to Basics

by Per
Back to Basics is an easy challenge on the HighGround map. Scavengers are enabled, and you start with advanced bases and medium power level. You play against a single AI.

You should probably be able to defeat this challenge before you try to play online against other people. But finding the fastest way to defeat the AI on this level may hold a challenge even to veteran players, as the AI starts with a well fortified base and will be quick to rush for contested resources.

Post your play-through experiences, your best time and comments below. 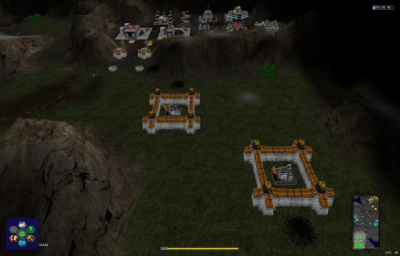 The AI's starting base

by Mats
Very easy level but great for 'easy' difficulty challenge. Fastest way to win seems to be machine gun cyborg rush with all research going onto machine guns and cyborg armour. You can quickly take the centre oil from scavengers and build a few cyborg factories on constant production.

by Assault Gunner
Beat the challenge the hardest way I could think of: wait until Dragon bodies to smash the enemy. Until then, all I did was sortie and demolish his oils outside his base... actually worked pretty well! He didn't get heavy bodies until after I started sending out Venegance Gauss Tracks after his bases... I like a looong game.

I managed to beat AI in 33min, using HMG/AGuns on cobra bodies and some mortars.

Edit: I tried cyborg rush, and it cut the time to 25:50. Including scrapping (:)) the scavenger bases. 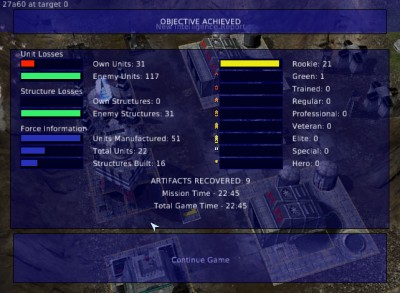 HMG Bug Tracks rush. AI put up more resistance than I expected. :/ Took a few tries before I broke through.

by Mats
Finished in 18 mins 51 secs. Started building cyborg machine guns immediately researching improved MG and cyborg armour. Rushed the centre with them at ~9 mins in and sent in about a half dozen trucks to build HMG towers while the cyborgs were fighting the enemy + scavengers. Took the centre oil resources and started to build HMG viper wheels at the two module factory. Once I had about 6 of these, sent them plus about a dozen cyborgs into the enemy base, with more HMG viper wheels being produced and going straight in. I took out tanks then factories first. Started my trucks on building morter pits in range of the enemy HMG towers. At about 16 mins the enemy only had these left plus a couple of buildings, but I had lost basically all my units. Took a while to finish off those hardpoints! Definately not the perfect tactic, but a big improvement on just plain HMG viper wheels/bug tracks or cyborg spamming?

I think this could be finished in less than 15 mins, maybe...

Improvements for next time - Build morters earlier. I think this could knock a minute of the time. Rushing the center at just the right time seems key as well - Catch the AI fighting the scavengers and pick the AI off while it's distracted.

by RBL-4NiK8r
Blah not that hard granted it took about 50 mins still a bit rusty on tech tree, but they never came down in force to do any damage to me, it was more just a box them up and wait for power and tech to kill them. I started with the borg rush like a few others said an forgot to send some repair borgs along for the ride, so i had a few more losses then I wanted at the start. In the end I took 8 Heavy Cannon Python Tracks into there base to draw fire as my borgs did the rest, mortar borgs kick ass from a distance, well kind of.

by Assault Gunner
problem with mortar 'borgs is that they have very low accuracy against anything that, you know, moves. But if I can get a screenshot, I will give you guys a screenshot of the next time I send a Hydra force into the enemy base. Everything went boom very fast. In fact, the only limiter on speed was the Dragon bodies themselves.

by RBL-4NiK8r
Well thats why I had bunkers to deal with them, ya they do suck, but 45 of them tend to do a lot of damage xD

by Mats
Finished in 14mins and ~44secs (can't remember exactly how many seconds). Did a truck rush to the edge of their base and built HMG hardpoints and manufactured more trucks to take the centre oil with HMGs hardpoints. Built ~15 morter pits to back them up and then went in hard with 9 HMG viper tracks. Lost them all! Second wave of 9 viper tracks finished them off. If I had waited for the morters to do more damage it could have been faster still (as I wouldn't have lost viper tracks to the MG bunkers and HMG hardpoints/towers.

Mats wrote:Took a while to finish off those hardpoints!

Ekhem, to win you just need to destroy factories and units, you dont have to bother cleaning up defence mess

Ekhem, to win you just need to destroy factories and units, you dont have to bother cleaning up defence mess

After this advice, I have the time down to 10mins 22secs (thanks Michal!). Building HMG hardpoints then morters at the edge of their base. As soon as the bunkers and MG towers at the entrance to their base are gone, rush (~12 it was) with HMG viper wheels and target units then factories. Morters took out the factory outside their base. I think once I break 10 mins I will leave this challenge, unless someone else does it faster?

by Michal
Geez, now I really have to practice some RUSH ;P

Re: Challenge: Back to Basics

by Assault Gunner
Rushing is harder than it sounds... unless you are the Zerg in Starcraft online. But even then, a zergling rush is kind of hard to pull off, and people usually put out a few units ASAP to deal with it. of course, here you can spam 'borgs.

Actually, now that I've played it, Starcraft is kind of similar to WZ2100. That was a compliment.

Re: Challenge: Back to Basics