Put some horn-rimmed glasses on him & you'll have a spitting image of Lav.

The new transport looks great however the turret on top of the cockpit does not make a lot of sense where it is as any weapons on a transport would be used to a) clear a landing zone below or 2) fire on pursuing aircraft behind.
Top

Put some horn-rimmed glasses on him & you'll have a spitting image of Lav.

now had you said black rim glasses... you would have been spot on...

I think the cockpit and windows are too big in size, by far. It looks like a smaller vessel, just scaled in size.

Sure, maybe a very large transport would have a big cockpit or even something like a bridge. But not that big.

In my understanding the engineering truck looks a little bit like this:

See? Its cockpit is tiny compared to the vehicles size.

The cockpit window of the transport is about half the size of the whole truck!
Top

Joe wrote:See? Its cockpit is tiny compared to the vehicles size.

I'll look at that on the model soon maybe scale a few things.
Thanks

Joe wrote:See? Its cockpit is tiny compared to the vehicles size.

I'll look at that on the model soon maybe scale a few things.
Thanks

Berg, thank you very much for your answer.

Do you know any visual size references for warzone? For example, what would be the diameter of the machine gun bunker in reality? Or the length of the python body? I think it would be really usefull to have such a reference.

I did do some scale testing a good while back and I found that a .pie 2 model that used points ranged over 128 units was exactly one tile on the game wide.
It's not too hard to work out what size a model is just look for the extreme points data on the pie file and thats how wide high deep etc it is in game.
I have a lot of info about pie files but its not all in one place the wzgm forum art section https://sourceforge.net/apps/phpbb/wzgr ... um.php?f=3
This is my wiki page on scaling its some insight into scale but not a total guide https://sourceforge.net/apps/trac/wzgra ... ModelScale

For scale you could use the scav infantry model

Meh, I had wrote a nifty post about this but accidentally closed the tab

I've been woring the last 4 hours on this

or something like that.
Putting it in a short way, each loading bay is loaded horizontally with a single tank, which is then hoisted upwards freeing space for one additional tank below. This would possibly allow faster deployment in relation to a single door, as well as make possible a faster retaliation in all directions, given an unexpectedly hot LZ.
The horizontal propulsion is a pair of non-reversible Jet engines, as the main heavy duty fans are designed to haul the cargo rather than providing proper displacement.
The hardpoint should probably be positioned on the tail as to repel intercepting fighter craft, as they often are in real military transporters of bombers IF I recall it correctly (it just makes plain sense to me and I do recall something like that).

The bridge is indeed that small boxy thing slightly displaced to the left lower corner of the nose, and I plan to position something else like air intakes there (the flow/area ratio would be optimal there, thinking about aerodynamics), but I'm not sure about that yet. Maybe just some large, warzone-ish identification red letters like "HT" or something like that, overlaying some heavy plating 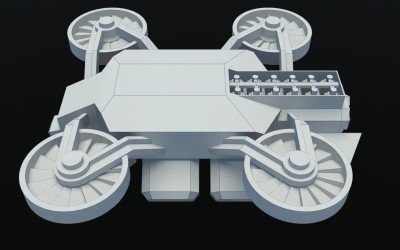 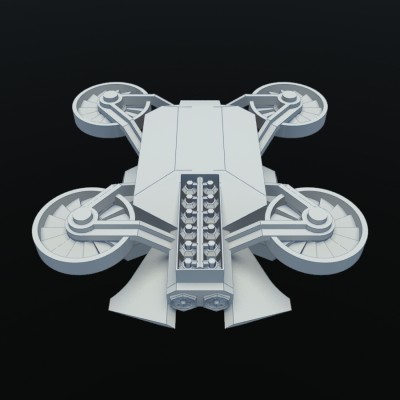 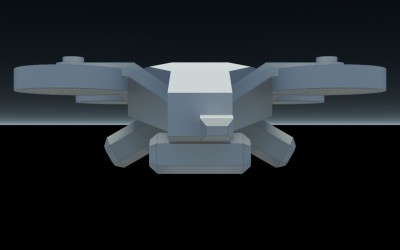 Ok, I agree that those exposed fuel tanks doesn't make practical sense but they do look stylish and makes me have sort of a "Flying structure" feeling about the transporter which recalls to a sense of heavy-duty and imposing power of some sort

Well, I can't tell wether I may actually finish the model myself and much less when I will if I can. There's a hefty ammount of mad exams and software development in those first stages of Comp. Engineering and probably it'll only get worse

Oh, and there's another pic showing the cargo bays in a more favorable angle. Please note that they aren't detaied yet, I've only roughly sized them.

The whole model is ought to have a proportional 5x5 tile size in-game (which "coincidently" matches with my time-forgotten ideas of strategically-valuable, regional LZ resources with limited flight paths for balance compensation). Each fan would be roughly 1.5 tile wide then

Design is probably heavily influenced by C&C3's NOD Carryall, of which Berg's own model reminded me about shortly after I saw it. But hopefully my insights are enough to differ from both mentioned designs