nah... needs to be fancy

I guess this wall will only be thicker, not technologically superior. Maybe "citadel wall" / "fortress wall" is more describing in that case

Meh, depends on your taste i like citadel wall though... i may have to make a citadel >:)

Here is the uv map and model for the single wall. If you could do the textures for it jorzi that would be great 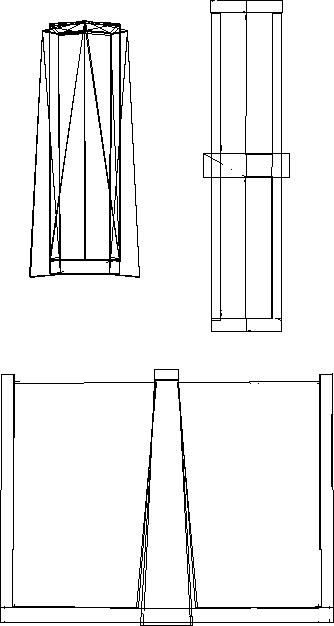 I'm sorry to be so harsh but I'm afraid this model wont make it into the game unless you remake it from scratch. Not because of the design but because of the mesh structure.
You made this in sketchup or 3dsmax? Either way the program apparently doesn't tell you much about the mesh topology. Either that or the exporter has some serious problems. The mesh may work properly in the 3d program but not in the game.

-All your faces should be quads or triangles. Other faces are called n-gons and can only be handled by advanced 3d programs, where they are automatically converted to tris before being rendered by the graphics card. Unfortunately sketchup always uses n-gons but that can be handled as long as the mesh is otherwise clean

-The mesh should be an empty shell with no innner structures. When you look at your mesh from the inside, it should look like a casting mold for your mesh. Each edge should only be connected to one or two faces. You can, however, have two intersecting meshes as long as they're two separate, clean meshes. You should be able to move the intersecting piece without affecting the other piece

-Avoid vertices in the middle of an edge and "invisible" faces. Invisible faces are faces with an area of 0, for example a triangle where one edge has a length of 0 or all edges are on the same line.

-The UV map should not be a projection of the model from different sides. That's not how it works. Think of a paper model. The faces shuld be arranged so that they could be physically printed, cut out and folded back into something that resembles the original model. Minor distortions in the proportions of the faces are, however, allowed and often necessary to reduce the number of seams.

I know, this is tedious and can sometimes be up to 80% of the work done, but hopefully you won't be discouraged. You can only learn by doing, unless you find some expensive 3d school, but that is usually not an option.

Thank you jorzi, All things DO work together for good. if you had not gotten me to completely redo them from scratch, then I would not have been able to further reduce the poly count. single wall: 34 polys!! other walls still in the works.

Hopefully you had some help from my previous post

Hmm something wierd is going on here

. Whenever I go to uv map my model (it IS triangulated) it adds a face to it in front of the left pane of the wall. Here is the model for ppl to look at maybe you can tell me whaat in the world I am doing wrong

You have extra faces added to the front and back of your wall.
here is a screen shot.
Hope you can see what i mean.
Forum is not letting me upload images.
putting it in tinypic Note the dark section at the top of your wall is faces the wrong way around.
Hope this helps.
Regards Berg
Top

Yes that red face is what I am talking about. Whats going on with it? how do I stop it from coming back when I uv map? BTW what program are you using?
ArtRev Website

macuser wrote:Yes that red face is what I am talking about. Whats going on with it? how do I stop it from coming back when I uv map?

I would delete the faces it looks like extras.
I deleted them in my 3d program and you wall looks ok although you have a good many faces facing inwards you will need to turn them to face out.
I do note that you have faces on the bottom of your wall these are not needed as the wall site on the ground and you can not see them anyway.
It does seem that the 2 extra triangles can be deleted without hurting your model.
How many faces do you wish to keep your wall below?
regards Berg
Top

3. I will delete those faces on the bottom
4. Just curios, what program are you using?
ArtRev Website