Being a long-term warzone 2100 player, starting about 8 years ago, I couldn't stop looking at the game and saying myslef: "That could use some new models". Seriously, I know that the actual state of the models and engine make it almost universally compatible, being of extremelly low system requirements. But most of the players should think, like me, that those 15-polygoned structures really could be improved, and if they were, the game would look way much better.

Now, getting to the point (as I always do in long posts, anyway

I've asked the dev-team if they wanted me to create some new, polished models for the game strucutres, and they said I could create them and wait for feed back. So, the application of them in the game itself should depend on approval by the community, dev-team, and viability in terms of performance changes, I think.
I'm going to post raw 3d-models, wich I'll first do in autoCAD, with only different colors, to allow better visualization, but no textures. At that stage, I could use your opinions, like "You could change <X>", "You could make that <Y> look more like the present one" etc.
After I've reached a decent level of approval, I'll start doing the necessary file type changes and texturizing, so the model fit the actual game engine without much work for the dev-team, and, if the community agrees, it could even be inserted in the game.

So, I'm going to try my best, and hope the community likes my work.
Hands on!
Top 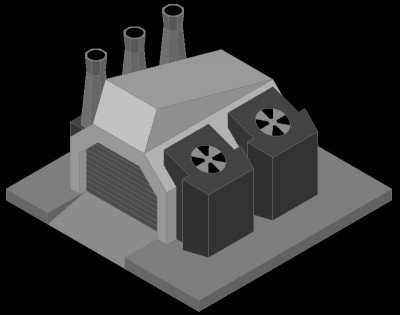 i'm curious how it looks in the end, atm i don't wanna suggest anything because i always have my own models in mind xD

keep up the work!
Top

I'ts hard not to get any influence, you know, but I don't remember any factory like that...
maybe the GDI war factory from C&C 3?
gotta take a look in your models, maybe I can get some interesting ideas!

Looks good, but I would prefer a version with 3 expansion modules(these dark grey parts).
Top

MetalBeast wrote:Looks good, but I would prefer a version with 3 expansion modules(these dark grey parts).

But, as I'm at the university right now and I do have a hour to spare, but I'm not with the factory model with me right now, so I'll try to make a research facility. I think the factory will look a bit strange with three expansion modules, though. Think they'll turn too small, but It'll be easy to make the model, so I'll do it tonight anyway.
Top

Yeah, I think the difference between a factory and a factory with module needs to be more obvious. Remember, function is at least as important as form.
Top

As required, here is the version with 3 expansion modules, with additional windows to get your opinions on those too. How about this one? 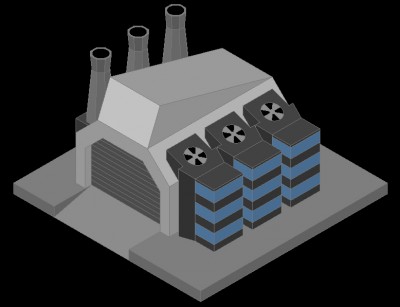 Zarel wrote:Yeah, I think the difference between a factory and a factory with module needs to be more obvious. Remember, function is at least as important as form.

Ok, but what is more obvious, two large expansion sets or three smaller ones? I'll get some screens of the three stages for better comparison.
Top

i like the new one better than the other, perhaps you could do something with those fans

starts to looks rather nice
Top

Okay, here they are. 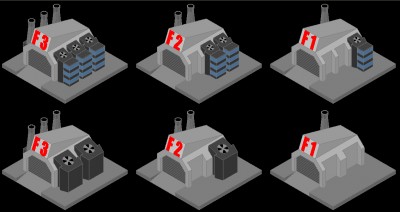 For comparison between versions 1.1 and 1.2.

elio wrote:perhaps you could do something with those fans

What kind of something would you like, sir? xD
Top

I think he means putting a real hole instead of black shadow, then put a thin fan on it, and add an animation which moves it when the factory is producing.
Top

Nice work! I love the crisp edges and slightly cartoonish look of the model. Looks like it has a distinct, clear style, which I like.

On the other hand, not so sure about those expansions... makes the factory without them look unfinished, and gives the impression of trying to overclock the factory instead of expanding it, if you understand what I mean.

How many polygons is it?
Top
Post Reply
167 posts