Ideas and suggestions for how to improve the Warzone 2100 base game only. Ideas for mods go in Mapping/Modding instead. Read sticky posts first!
Post Reply
27 posts

Personally, I feel that the Arizona, Urban, and Rockies tilesets, while handy, are getting tiresome to look at over and over for the past 10+ years. Perhaps introducing a new tileset or 2 would be a refreshing change from the same old desert/urban/ruins/taiga/tundra landscapes.

Tropics: A tileset made for developing swamplands, jungles, or tropical islands to name a few.

Plains: A tileset with quite a bit of greenery, much like the Rockies tileset, though much warmer, closer to the Arizona tileset (though without the deserts). Could be used for creating grasslands, prairies, scrublands, forests, etc.
Creator of Warzone 2100: Contingency!
Founder of Wikizone 2100: http://wikizone2100.wikia.com/wiki/Wikizone_2100
Top

A coastline tileset - would be great to have some maps showing an ocean (darker blue water) with waves crashing against rocks and lapping at beaches.
"Dedicated to discovering Warzone artefacts, and sharing them freely for the benefit of the community."
-- https://warzone.atlassian.net/wiki/display/GO
Top

Shadow Wolf TJC wrote:Tropics: A tileset made for developing swamplands, jungles, or tropical islands to name a few.

Shadow Wolf TJC wrote:Tropics: A tileset made for developing swamplands, jungles, or tropical islands to name a few.

You mean like doodads?
If you're reading this; you're awesome.

Build Orders and Other Such Nonsense; [http://warzone2100.zxq.net].
Top

Yep, new tilesets would be nice, especially if someone would like to create more campaigns later.

Nameless, yeah, I guess that is mostly what I've wanted to discuss here.
Nadszedł już czas, najwyższy czas, nienawiść zniszczyć w sobie.
The time has come, the high time, to destroy hatred in oneself. I think that an interesting start, would be to combine each of the tilesets.
"...If pure awesomeness were bricks, this would be the Great Wall of China...
The glory of this has collapsed on its self so far, that even the neutrons have collapsed."
Top

I once made volcanic tileset, but unfortunately i lost the mod (couldn't have attached to the forum due to size), so only a couple of screenshot remains

For engineered geometric maps, it's a good idea to make the whole map of decal tiles (technically similar to craters or roads, that is, ignoring the capabilities of the new 3.1+ renderer), something like the "marble tileset" i've been trying to introduce here.

+1 to allow mixing existing tilesets, but i'm not sure how much will it impact RAM usage. 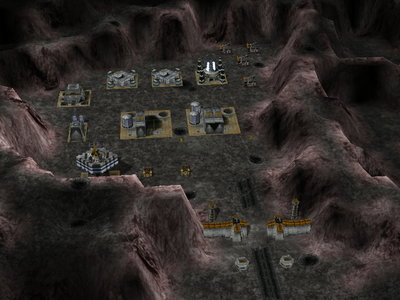 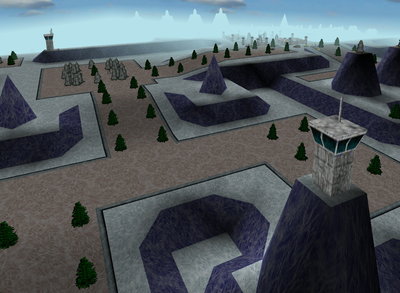 For ideas around desert tileset, I highly recommend taking a look at the Stronghold series of games from Firefly Studios, particularly Stronghold Crusader and Stronghold II. I've made maps in many games (no Warzone maps yet though) and for me the best map editor ever was the one that came with Stronghold II - it was possible to create simply stunningly beautiful maps, even with things like adding sound effects to features (such as birds chirping on a tree, or wind howling on a rock, or sound of the sea on ocean tiles, etc). I know WZ is a long way from being able to do those sorts of things, but if people want inspiration for future direction then Stronghold II map editor should be a good case study.
"Dedicated to discovering Warzone artefacts, and sharing them freely for the benefit of the community."
-- https://warzone.atlassian.net/wiki/display/GO
Top

Well the idea sounds good I agree.. fresh air here would be nice

But I do agree

Bwah! I just found an old site I did for a map I made in SH2 editor: http://www.stronghold-knights.com/jarrod/index.html -- Take a look under the locations menu for more screenshots.
"Dedicated to discovering Warzone artefacts, and sharing them freely for the benefit of the community."
-- https://warzone.atlassian.net/wiki/display/GO
Top

Someone did a Siberia tileset:

http://www.moddb.com/mods/wz2100-solar-assault/images
"Dedicated to discovering Warzone artefacts, and sharing them freely for the benefit of the community."
-- https://warzone.atlassian.net/wiki/display/GO
Top

Why not? You just set all tiles to decals and get your precious old renderer if you want 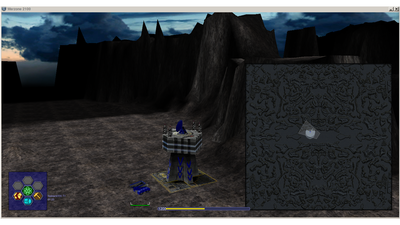 I'll leave it to you guys to figure out what's so special about it.