Ideas and suggestions for how to improve the Warzone 2100 base game only. Ideas for mods go in Mapping/Modding instead. Read sticky posts first!
Post Reply
17 posts

I have been playing your (our?) fantastic game since it was commercial, it is my all time favourite, although I have not yet ventured into mutiplayer online yet.

I have the following suggestion:

To be able to zoom further out.

Explanation: I would find it desirable that I could zoom out double or tripple the distance I can now, in order to see more of the playfield. I play on a 24' screen, so I believe it could be really beneficial.

Thanks for the best game.
Top

I won't say that I need to zoom more than it now, but knowing, that it already has been increased in the first ever version after it has been GPL'd, it could be changed to any zoom factor. For me playing on 1024x600 (10") or 1333x768 (18") makes me already see the "end of the world" or to be more exact, the border the game stops to render, if I look to any direction instead of top down!

...but even seeing the end of the world, sometimes I had the thought, that the camera could have a bit more zoom!

in "Supreme Commander" you can zoom out so you see the Battle field as a map instead of rendering everything. units and structures becomes small icons. with this ability you actually feel like you are the general and can make strategic decisions.

i wonder if this could be useful in Warzone2100. i think it should be tested in a beta or something like that.
yay, lolcakez! *omnomnomnom*

IblisTheMage wrote:I have the following suggestion:

To be able to zoom further out.

I second this idea and support it.
My multiplayer name is Verin
Usually in ideas and suggestions.
I Am also an ASE certified technician.
Top

Even though I wish that I could see more within the same viewable space, I wonder if more zoom out would make the player feel like he is playing a board game. Would it make the player feel less engrossed in the war games?
"Speak when you are angry and you will make the best speech you will ever regret."
-- Ambrose Bierce
Top

That's actually one of the things I didn't like about SupCom. At low zoom levels, you couldn't see anything around you, and at high zoom levels, all you saw were icons.
Top

Hmm... Simply zooming out a bit farer would be enough for me. All other things would be adding a real map view of the game, but that's what the radar is for. The radar could go up to fullscreen, but I think it would look kinda ugly, as it already doesn't look good fully zoomed even on my relatively small display! Anyway I got 2 shots from "Dungeon Siege" I made to bring another example: 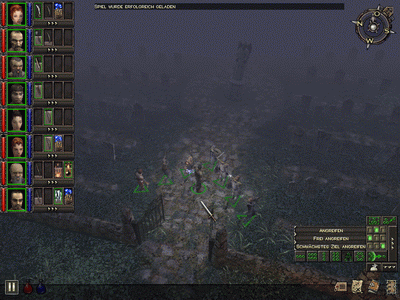 The first one here would be the standard view as we know it. 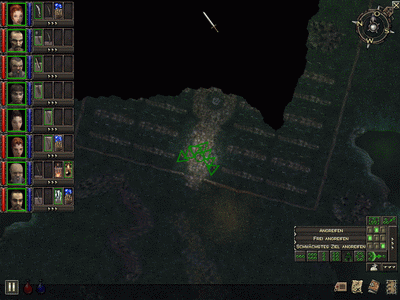 This is the thing I thought about. Maybe (even if running out of keys) a possibility to zoom out to a part of the map from top down view. So you can see the whole part of the map, that is actually rendered, but without having too much control about the units. Maybe limiting commands to actually selected units or something similar.
Manjaro XFCE / Intel Core i7 6700 / 32GB RAM / NVidia GTX1050Ti
Top

That's actually one of the things I didn't like about SupCom. At low zoom levels, you couldn't see anything around you, and at high zoom levels, all you saw were icons.

A flick of the scroll wheel is all that is required to move between the two.

Mind you, I love how you polarised the concept to low and high, and ignored the middle ground.
Top

I know I have seen this question before and the reason given for them not doing it, is that it would cause a big performance drop for people who have systems that are not very high-end.
Last edited by Crymson on 16 Jul 2010, 20:13, edited 1 time in total.
Top

We have increased zoom-out in trunk already. As the previous poster said, one reason the zoom out is limited is because of performance - we have some hard limits on how much of the map we draw each frame. However, when I increased the zoom out limit in trunk, the first limit I hit was that at some point the models were starting to look like crap because they were shrunk too much. I guess at some zoom level you need to switch to models with less details.
Top

BulletMagnet wrote:A flick of the scroll wheel is all that is required to move between the two.


BulletMagnet wrote:Mind you, I love how you polarised the concept to low and high, and ignored the middle ground.

That's because by the time I zoomed in enough that I could see my units in any detail, it was already so close that I couldn't see much further than that. The areas of "too close to see enough of the map to play the game" and "too far to see how cool my units look" overlapped. I ended up choosing to keep it zoomed out a fair bit (since playing the game was more important than having good graphics), but I never got to see my units' bullets, only little icons representing them.

I much prefer games like Warzone, StarCraft, and RA3, where I can both see my unit graphics and a significant proportion of the map at the same time. And no need to zoom back and forth, either, since that always makes me feel like I'm not at exactly the zoomlevel I was at before, and the new one isn't as good.
Top

Yeah... frankly, locked zoom/camera angle would be nice.
"There is no greater Void than the one between your ears." - Void Ray, StarCraft 2.
Especially the Void between the ears of people who think that No VTOL is a good idea, and won't lead to arty wars. I've won one, and I have to say: I hated it.
Top

If we were to implement a zoom out function- a couple things would need to exist -> enlarge the map size (which I hope is coming soon) and increase unit limits. Since the tactical view is for supreme commander (due to the large number of units) I feel that the only true use would be an increased battlefield- right now with the limits, it seems to be at the right size.
Top

No, that would utterly and completely suck...
My multiplayer name is Verin
Usually in ideas and suggestions.
I Am also an ASE certified technician.
Top
Post Reply
17 posts