Ideas and suggestions for how to improve the Warzone 2100 base game only. Ideas for mods go in Mapping/Modding instead. Read sticky posts first!
Locked
219 posts

shishkebab wrote: I like your idea, but it sound hard to implement.

I also have that problem with the unused hardpoints, like AA hardpoints, but get rid of those and then you don't have to research as much.

aa bunkers dont fire till they have line of sight, os if they are near a wall their effectiveness is reduced. towered aa gets around this, keeps you base designs open.
but if the designable defences idea was used... ::)


Verminus wrote: it would require re-balancing of every weapon, unit and building, as it could easily make every tank either too fragile or to hard to kill.

the re balancing i dont think would be that necessary would it?(ignoring the current balancing, & people with a fetish for some weapon, they want given more power)
and units too hard to kill?
the turrets already have hp values dont they?
just that weaker stuff would be disabled, but tank can still move.
MOTHERBOARD - MSI P7N PLATINUM¦-¦PROCESSOR - C2D E7300 @ 4.00GHZ
MEMORY - 4 Gig (2x2gig) ddr2 1066mhz¦-¦OPERATING SYSTEM - WINDOWS 7 (ULT)
GRAPHICS - BFG GTX 260 OCX (requires ForceWare drivers for good openGL)
Top

Rider wrote: I just thought of something else (something minor) that I'd love to see in Warzone soon. The ability to select other factions units/structures to see their health. It's a lot easier then holding down the right control all the time with the risk of de-selecting your units when you don't let go before the enemy unit dies.

Hmm not sure about that. In fact, it would be more realistic if you couldn't see the enemy unit's health at all. The current system is ok, but extendending this  would be overkill. I don't think a player should now the exact health of enemy units. Something like the smoke that indicates damage is enough.
Just my opinion

Consider it done in the next version.

Well consider me not playing the new version then...

There is no way I'm going to get out a stop watch to time the smoke puffs just to find out what the health of that unit is.

as far as realism goes, you do know the space shuttle recently use a laser to scan for damage right?

and when you shoot something it usually leaves some kind of physical evidense. even most bullet proof materials. untill warzone gets better graphically with it's damage modeling you cannot turn those bars off.
Top

There are also some people who want to hide the last produced unit in het multiplayer menu. It's a similar issue as the healthbars. Some want to see it, some don't. A solution could be adding extra options in the menu. But then the menu gets too complex. Another solution would be to set these options to a default value in the game, but allow it to be overwritten by mods. That might be the best thing to do.
Top

We tend to err on the side of fairness.

ratarf wrote:Another solution would be to set these options to a default value in the game, but allow it to be overwritten by mods. That might be the best thing to do.

EvilGuru wrote: Consider it done in the next version.

I dunno, perhaps we can have a difficulty option for this, those that want hardcore, then fine, don't display anything for you.
Those that want a difficulty that is less than hardcore, can see the health bars.
Host decides, like they do for maps/fog type, and whatever else.


ratarf wrote: There are also some people who want to hide the last produced unit in het multiplayer menu. It's a similar issue as the healthbars. Some want to see it, some don't. A solution could be adding extra options in the menu. But then the menu gets too complex. Another solution would be to set these options to a default value in the game, but allow it to be overwritten by mods. That might be the best thing to do.

Already working on that aspect for the units.  I just need icons/images to replace them with.

For the menu option part... that would be the way I would do it as I replied above, before I saw your post.

EvilGuru wrote: Consider it done in the next version.

Per wrote: I like being able to see the exact HP of enemy buildings/units, and I do not mind them seeing mine.

How about instead of showing the exact HP or relying on smoke puffs of all things (why smoke puffs? I mean come on), doing the right click on an enemy unit will show a ROUGH estimate of that unit's current HP?

Basically the bar shows when the enemy unit/structure is highlighted, but it'll always be full - and use a colour based estimate like the existing system, but without the specific amount. Green = no damage, yellow = moderate damage, orange = very damaged, red = extremely damaged, black = nearly dead.

Naturally the bar is precise for your own buildings and structures.

I think this encompasses both fairly well.

) to it. Ideally you could place it on the lower section at the back, or even tweak the model a tiny bit to increase the height of the rear to compensate.

The suggested turret design system (once you research the actual weapon, you can design it like a unit and choose the base mount) - this would free up a lot of space on the build menu and if you only ever use one or two turret types I'm sure you'll appreciate this

Gates would be good to get around pathfinding issues with 1-space gaps and light-unit rushes into the center of your base, so long as they're at least 2-3 spaces wide to avoid choking with large units.

A handful of pre-fab designs at game start that depend on your tech level. For example if you start a T1 skirmish map with a basic base, you'll have MG Viper etc. designs on your design menu to start with.

I'm sure this has been asked for time and time again, but multi-weapon-points for larger chassis. I read somewhere around here that the engine has had it added, but nothing seems to make use of it yet.

Some adjustment of the bomb weapon model/locations wouldn't go amiss either. Also, maybe a "bombing run" attack style for heavy bombers, where they fly over an area and drop bombs as they go? Less accurate, but better against larger formations.

It seems rather silly that the bomb bays are portrayed with a number of bomb points (or at least, they look like them) but only ever drop two.

On a very very belated note/response to;


-possibility to sell units
made a wrong choice? sell them on 75% of the price..

I'm pretty sure recycling has returned like two thirds of the unit's cost in power for the longest time. I only recently started playing again though.
Last edited by Arcalane on 11 Apr 2008, 00:46, edited 1 time in total.
Top

Some time ago I said about this but here is again. I advice to make a accout system to lobby.wz2100.net for Internet playing games. & to move " ..\Warzone2100_2.1\config\multiplay\players\Player.sta " files to MasterServer to keep records in there(for security only). The goal is to make MP game more reasonable. I'm basing on my expirience, I play Counter-strike source on one server & I play just for scores which gives for each killing =) , howerever that score system gliches but I still plays no matter what. I'm trying to tell you that "playing for fun" becoming not enough in present days. Implamenting thing like this has many advantages & I'm 100% sure that this will help in future

I'm not making you to do a window authorization like on screenshot, may be just two lines(acc.\pass) in config file will be enough. So I couldto classified this thing to 2.1 roadmap as a Multiplayer feature. 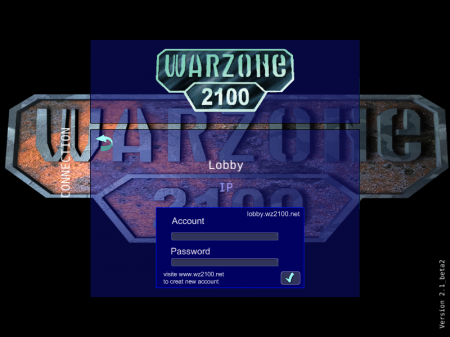 Excelent ;D
~~If someone asks you to sudo rm -rf anything don't do it.~~

[url=http://youtube.com/watch?v=ks-N4rI_1RU&feature=related]
This Guy for PRESID
Top

The problem with being able to view the enemies health is twofold.

Firstly, some consider it unfair that you can see the specific HP of another players unit.

Secondly, you do not know the HP of any unit which is not your own. You might think you do, but trust me, you don't. When you look at someone else's HP what you're actually seeing is what you think it is. Therefore if you watch it closely enough you will often see the HP change, sometime for better, sometimes for worse. This happens when your system syncs the droid with its actual owner.

Why is this bad? As I do not want to have to answer 10-15 bug reports about how an enemy units HP changing is not a bug.

Knowing the exact HP of an enemy unit is in no way vital or important. Units are smart enough to target units low on HP automatically.