Did you create a mod, map, music, or a tool? Present them here and earn feedback!
Note: addon requests do not belong here.
Note, everything uploaded to this forum, MUST have a license!
Post Reply
521 posts

This mod is supposed to make scavenger AI come up with some advanced behavior (capturing oil derricks, building bases and defenses). Would love to see scavs setting up outposts near any log cabins on the map...

EDIT: Will we see the return of scav helicopters?
"Dedicated to discovering Warzone artefacts, and sharing them freely for the benefit of the community."
-- https://warzone.atlassian.net/wiki/display/GO
Top

v0.02 update. Now they sometimes capture oils, build defensive structures around bases and oils and some power generators if necessary.

aubergine wrote:Would love to see scavs setting up outposts near any log cabins on the map...

EDIT: Will we see the return of scav helicopters? 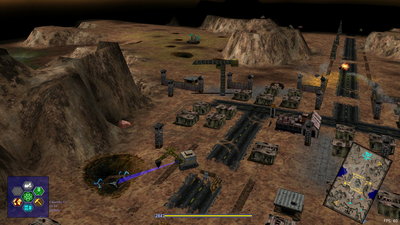 It's a pity scav's can't "capture" log cabin features and have them produce scav soldiers or do research or something like that. Would require update to API, eg. feature to transfer units/buildings between players. A scav crane could move to the building, then issue command to transfer building to scavs after a short pause, then the scavs can start doing research or recruiting soldiers depending on the type of log cabin.
"Dedicated to discovering Warzone artefacts, and sharing them freely for the benefit of the community."
-- https://warzone.atlassian.net/wiki/display/GO
Top

@NoQ - have you experienced anything unusual while implementing the script from a JS API perspective (eg. something that a normal AI scripter wouldn't have encountered before)? If so, could you post notes or PM me - I want to make sure my documentation wiki has good infos for working with scavs.

For example, do enumDroid() and enumStruct() work OK? There were some bugs with them not being able to list stuff if player >= maxPlayers in the early betas when I last tried using them to get lists of scav objects.

Some useful links for anyone else wanting to script stuff relating to scavengers:

* https://warzone.atlassian.net/wiki/disp ... ngerPlayer -- defines which player Scavs are on the map (links to lots of other useful stuff)

Also, could you get the mod in to a sourceforge project? It will be really useful to see the changes you make from one version to the next, along with your release notes. At some point I plan on writing a tutorial (or maybe just a video?) showing how to start a script and then evolve it in to something better, using your scripts as an example. Did you keep v0.1, 0.2 and 0.3?
"Dedicated to discovering Warzone artefacts, and sharing them freely for the benefit of the community."
-- https://warzone.atlassian.net/wiki/display/GO
Top

The only nice thing i found out about making scavenger AIs is that scavenger templates aren't linked together as much as cyborg templates are; that is, you can mix scavenger mgs, cannons and rockets as much as you wish. But note that some weapons are invisible (scavenger machineguns) and some bodies don't have connectors, so no weapons will appear on them, or something like that (this includes trikes, buggies and jeeps).

Also, scavenger people don't react on DORDER_ATTACK (and seems like they can't attack at all) (will have a closer look). 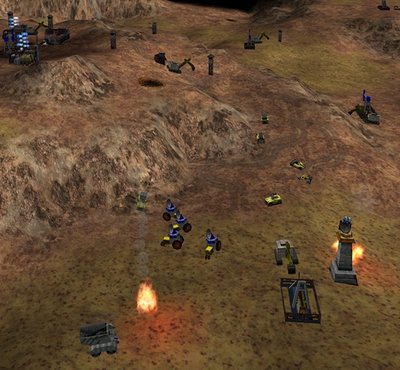 EDIT: Tractors and diggers FTW! This is what Farmville should have been! Ditch the vegetable patches and replace with mini-rocket bunkers!

EDIT #2: Why not just keep old versions as attachments in this topic?
"Dedicated to discovering Warzone artefacts, and sharing them freely for the benefit of the community."
-- https://warzone.atlassian.net/wiki/display/GO
Top

It does in general, but it's a bad choice anyway: units will ignore everything else and just go straight to the target, which is bad in this situation.


aubergine wrote:EDIT: Tractors and diggers FTW! This is what Farmville should have been! Ditch the vegetable patches and replace with mini-rocket bunkers!

Heh, but scavengers already put cannons on pre-collapse buses and firetrucks ... why not? (:


aubergine wrote:EDIT #2: Why not just keep old versions as attachments in this topic?

Is it really that necessary? Well, previous versions are so bad that they aren't even interesting ... may i consider v0.06 to be the first release?

I think the early versions are interesting from a learning perspective, because they will often be much more basic than the version at which the script is deemed to be "acceptable" and then continue to get more complex thereafter.
"Dedicated to discovering Warzone artefacts, and sharing them freely for the benefit of the community."
-- https://warzone.atlassian.net/wiki/display/GO
Top

In any case good work!

In general, if you see glowing, pulsating things in the game, you should click on them.
- Demigod Game Ganual
Top
Post Reply
521 posts