The projects speaking tube.
Add your two cents if you want to.
Post Reply
54 posts

We'd like to thank all our testers and contributors for bringing us this far. A lot has happened since our 2.2.0 release nearly a year ago. We passed revision 10000 two months ago, and it's getting lots harder to remember these five-digit revision numbers.

We also have a new website design, and an Add-ons database for all our user-contributed maps and mods. It's time to begin work on 3.0.

But I'm sure you guys are more interested in what's improved in the game itself.

Well, we have a few new keyboard shortcuts involving the Alt key. We darken areas of the map you can't see, too. It is now possible to put multiple weapon turrets on a single tank. Read on for more. 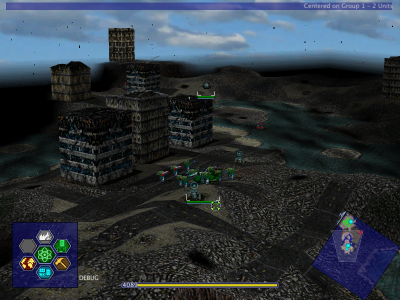 We have a few new keyboard shortcuts involving Alt. For those of you Linux users, you may have to use fullscreen mode before they work, but Windows and Mac users can use them at any time.

With a cyborg transport selected, hold down Alt and click on the ground to automatically unload all your cyborgs.

With tanks or cyborgs selected, you can hold down Alt and click on the ground to attack-move there (which will tell them to stop and destroy everything on the way to their destination).

With a VTOL selected, you can hold down Alt and click on the ground to tell them to patrol between their current location and the clicked location.

With any attack unit selected, you can hold down Alt and click on one of your own units to attack yourself. This is not recommended, though, as it's nearly always better to simply right-click on the unit and click "Recycle". 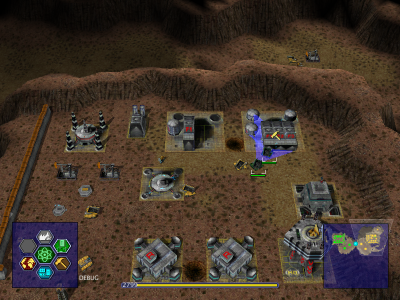 Now, you can do more with your allies, including helping them build structures, repair their structures and units, and use their repair facilities and rearming pads. 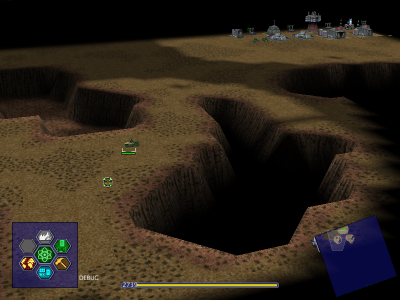 The game will now darken areas you can't see, so you can see at a glance where you need more sensors. 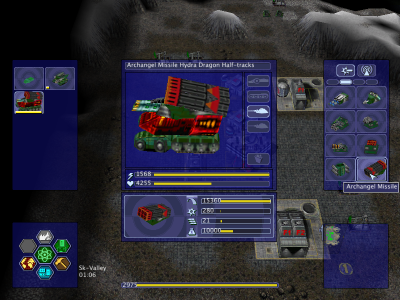 You can now put multiple weapon turrets on a Dragon body. Better start researching, since these things are not easy to get. 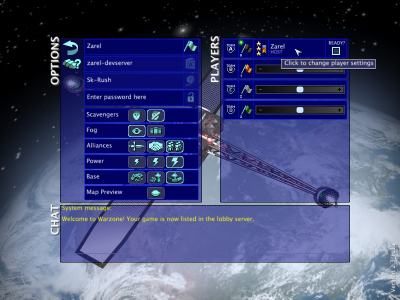 Now, you can see the color and location of each AI, to make it easier to decide which ones to disable or make more difficult. The "Ready" button has also been made clearer, and the host can set the location and position of any human player.

We've also renamed Mayhem mode to Scavengers, so it should be clear that all the option does is enable scavengers on maps that support them.

Cannons have been underused, so we've decided to make the Assault Cannon and Hyper Velocity Cannon easier to research. The Plasma Cannon is now considered a cannon as well, and has significantly higher range than before.

Excluding artillery, the Heavy Laser now has the highest range in the game. Its damage has been slightly lowered to compensate, but with enough of these, your base should be well protected against attacks by hovercraft and cyborgs. The Seraph Missile's range has also been increased.

Warzone now comes with the DyDo AI, an improved version of the BecomePrey AI. This AI is significantly harder than the default AI. The default AI has also been improved.

We now have a new game mode in the Single Player menu called Challenges. See who can complete a fixed game setup the quickest!

The game lobby now shows the version and mods of all hosted games. It also handles passwords much more intuitively than before.

Cheat mode is now significantly easier to activate than before. You still won't be able to do it in multiplayer, though.

It's now easier than ever to install a mod - simply drag it to mods/autoload/ in your Warzone 2100 configuration folder (which should be in My Documents for Windows users and ~/Library/Application Support for Mac OS X users). Note: You may need to create the autoload folder if it does not already exist.

As always, we've done much to decrease the number of bugs and crashes you experience.

Check the full changelog for more details than you ever wanted to know.

yay! The amount of work put into these updates and the frequency of the updates are amazing for an open source game!

Congrats to all the devs on the official release!


Zarel wrote:
Screen shot 2010-04-24 at 4.13.06 PM.png
Now, you can see the color and location of each AI, to make it easier to decide which ones to disable or make more difficult. The "Ready" button has also been made clearer, and the host can set the location and position of any human player.


The host can now set the: starting position, team, and color of any human player.
I'm on the forums on a limited basis. I play MP late Saturday night or Sunday afternoon/evening; my game handle is Cosmic Raven.
Top

So what now?
Will be there branch 2.4 or we will head directly to 3.0 (and yes, I know what Trac says currently

So it's finally here. I've been waiting for this moment unpatiently... It's sad that now I won't be able to play, because my parents prohibited me to use the comp... :<

Anyway, I will sneak sometimes for checking the forums. :/

Excellent work, you've made my Sunday.

Congratulations Devs, Warzone is getting much better on each series

Great! It is good to see so much progress in such a short period of time.
Top

Thanks for answer.
I hope that there won't be so much delays.

Thank you guys! I had very cruel and difficult day and now... when I saw 2.3.0 version in portage and came to check news on website... This day becomes little sweetier... Thanks! Thanks! Thanks!
:: ready to compile ::
Top
Post Reply
54 posts