how you calculate values 0,94 and 0,37?
is this some kind of "feel" values or you have exact formulas for this values?
anyway can you comment my suggestion about making incendiary damage should dependent on propulsion and defense strenght?
Top

0.37 is r^(√2) where r is .5 for the flamer. That √2 might be questionnable, but i know for sure it will be greater than 1 because it's an areo of effect and smaller than 2 because you can't dream of a super dense pack of unit each time you shoot and the portion of you area that should be empty, should increase with your area expending.

√2 is the straight line between the 2 perpendicular dimensions of lenght 1. It's a very good mid point for that kind of equation. It's not like i chose it totally randomly. Dont be silly

Personally, I'm not all that familiar with the Master build, but here's my opinion on what Flamers and burn damage in general should be like:

2. Burn Damage should be multiplied by the weapon type of the "host weapon" affecting the target's unit or structure type. For example, the burn damage from a Flamer attacking a Hardpoint should be multiplied by only 10%, while the burn damage from a Flamer attacking a Bunker should be multiplied by a whopping 300%.
3. As far as how thermal armor should apply to burn damage, I have a couple suggestions: Finally, I'd like to ask as to why the only structures that we can build that have Flamers, Infernoes, or Plasmite Flamers on them are all Bunkers? Pretty much every other weapon type in existence outranges Flamers, though that can be compensated by cleverly placing them behind hills (such as just behind that crater to the north of the LZ in Beta Mission 6). However, what really cripples them in my eyes is the fact that Flamer Bunkers are themselves weak to their own weapon, even more so than Cyborgs! As such, I wish that they were mounted on Emplacements instead of Bunkers (or Hardpoints or Towers). While still being low to the ground like Bunkers, Emplacements are treated as Hard Structures, meaning that Flamers are very ineffective against them.
Creator of Warzone 2100: Contingency!
Founder of Wikizone 2100: http://wikizone2100.wikia.com/wiki/Wikizone_2100
Top

Incendiary damage bugs was fixed, great thanks to Cyp!
now it will work with any number of updates per second and etc.

Can we stay with the actual balance ? Now it's faster units that are weaker.
Heretic 2.3 improver and proud of it.
Top

ok, i see too few people are intrested or just think what im noob and dont respond
i believe with adjusting balance games in WZ will become more smoother. fact what most people play high oil says what current balance not the best :p
Top

oh yeah, of course I agree that the incendiary damage should have the weapon type (and modifiers) of the weapon that shot the projectile. But the actual flamers weapon modifiers favor tracks, and I think we shouldn't change it.

WZ could have unit formations it possibly can solve some overpowerness of inferno, because in most cases units just can stay with spaces and with bigger distance to resist to area effects
Top

I've been trying to make unit formations in my AI, for example VTOLs flying in a "V" shape but its really difficult to achieve. For land units it would be almost impossible because as soon as they need to go round a corner they will lose formation.
"Dedicated to discovering Warzone artefacts, and sharing them freely for the benefit of the community."
-- https://warzone.atlassian.net/wiki/display/GO
Top

inferno weapon have range of 4 tiles
but in real it can shoot to double range! see screenshots
penetration effect?? may be it should be adjusted to not make inferno to fire at double range? 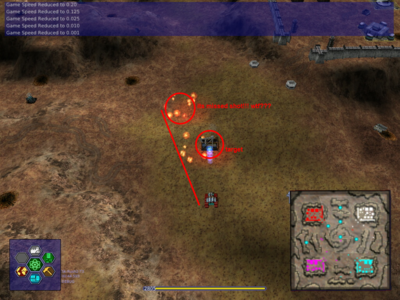 [update]
calculated approx inferno range on second screen, range = 6
so its not so much, as i thought
Top

funny..
when player have a lot of flamers and attack, he covers with fire much more than 4 tiles + 96 incen. radius
i think is one of reasons why flamers so strong
Top
Post Reply
114 posts