Here ya go  ;D
...and yes I have tried building stuff all over the peninsula, which worked when I played the original version 1.0 (it took me til campaign 3 to figure out there were updates

RayfenWindspear:
I couldn't confirm a bug... Right west of your base there is a blinking red dot. Build a MG bunker there (MG tower doesn't seem to work, but possibly other bunkers or maybe hardpoints are ok as well).
As soon as you have started building the bunker, a new red dot will pop up and the enemy will get reinforcements at that new location. Build a bunker there, too.
The locations of the beacon (and thus the enemy reinforcements) seem to be quite random.
I didn't play any further, so maybe it continues after that for a while...
Top

RayfenWindspear wrote: 1. Any time (well, most of the time) I use the ctrl or shift buttons to select multiple units, queue builds, or change the game speed the controls kinda "lock up" for about 5 seconds and wont let me do anything. The game still plays fine but I cant move the map or click stuff or anything. Which is kinda annoying when you've just changed the speed to 20X  >:(. Specifics: Mouse shows target reticule when this happens. Game does seem to slow a tiny bit and mouse kinda skips around a little.

This is not reproducible here...
Top

Ok I got it to work the only problem I have now is the screen is to dark Guess its the Gamma .
I read sombodies thing on correcting this but dont understand what to do
rcbecker1

Did you allready try to raise the gamma setting?
Try to replace gamma=20 in your configfile with eg. gamma=40
Top

Got a crash but I can't find the gdump file. I'm on XP.

UrbanVoyeur wrote: Got a crash but I can't find the gdump file. I'm on XP.

On Windows you won't get a gdmp file... You just get a mdmp (minidump) in your temp directory, if you choose to create one.
I attached sample screenshots so you see how it should look like in case Warzone crashes.

This was a data-side change and thus is not fixed by replacing the exe. You have to wait for the final version, sorry.

No that file will not be sent automatically to us (this is because we don't want to invade in people's privacy).

And if you're WZ doesn't crash it shouldn't generate a dumpfile.
"First make sure it works good, only then make it look good." -- Giel
Want to tip/donate? bitcoin:1EaqP4ZPMvUffazTxm7stoduhprzeabeFh
Top

This don't work in win98 for me.
It don't even start.
The first picture is the System tab.
The second is without dbghelp.dll.
The last with dbghelp.dll installed in the warzone programm folder. 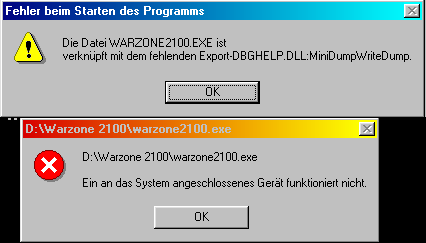 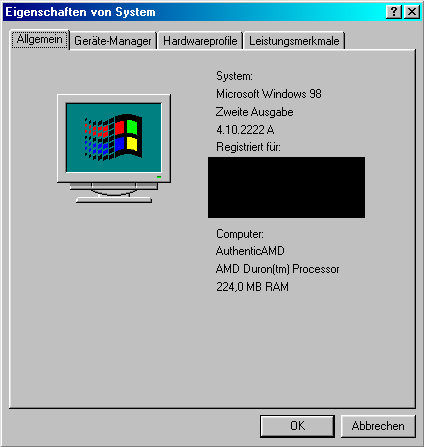 Sorry, my fault. I read the article on MSDN wrongly and thus pointed you to a DLL which is too old.
I attached the most recent dbghelp.dll I could find (from "Debugging Tools for Windows", which furtunately allows distributing).

Microsoft says that the Debugging Tools support down to WinNT, so I hope that the DLL will work on Win98 also. If it doesn't, please let me know, then I need to workaround this by checking the DLLs presence and leave Win98 systems without debugging aid.
Last edited by DevUrandom on 20 Mar 2007, 15:12, edited 1 time in total.
Top

Now, it starts in win98se. I will report if it crashes.
Top

Hi There, Ive just joined up on here after downloading the latest version, I must say that i am dead chuffed to find Warzone 2100 on the internet.
Im kind of new to computers and a lot of the stuff discussed here is a bit alien to me but i'm happy to report that my download is working just fine except for one minor problem...The in game movies-Cut scenes and Mission Briefings?

My Game screen goes blank (Tan colour) when the Mission Briefings come in, I can get by it if i just press Escape and then im straight back into the game.
But i am curious to know if anyone else has the same problem.

Once again, Thanks for the great Warzone 2100, I have the Playstation version (In a very safe place) and its great to finaly have it on my pc.