Get some help with creating maps or modding.
Need a map editor or other tools, look here!
Post Reply
8 posts • Page 1 of 1

If you found and bugs in the current Flame or sharpFlame, then post in this thread.
If you need some improvements done to either, then please be verbose on what is it you need, and how it should be done, and why it is needed.

All OT posts will be killed on site.

A list of accepted ideas that are being worked on:
(none so far)
/facepalm ...Grinch stole Warzone

Control map format version through an extra file in tilesets and objectdata.

Map format version (which is also savegame format version) is stored in game.map in the second 32-bit word. Current version supported on -master is 39 (the constant is called CURRENT_VERSION_NUM in the game source), and the oldest supported version is 10 (hardcoded in mapLoad()). The game uses this number to detect explicit incompatibilities with maps.

vexed wrote: then please be verbose on what is it you need, and how it should be done, and why it is needed.

Just now, i am making a new map in Rocky-style and i am badly missing a feature like the boulders in Arizona-maps. I know, i can use this feature in every style, but it looks very bad on snow. I need this feature to block a high-plateau near the base. I don`t want, that transporters are able to land there. I could use some tiles, changing them to cliff faces. But the map is more or less near the finish and in this case it would be necessary to prove the whole map , if there is this cliff face tile anywhere. Horrible job. We have the boulders in Arizona, why not in urban and in Rocky? This blocking feature is very important. It is a pity, that i can`t program

Sometimes i use the generator for heightmap ideas. Something is going wrong there. Here is an example: I give the player No.1 for the base the y-coordinate 90 and the generator change to 64. That means-he calculate 76 (which is x in the map width) - 12 = 64. But the map has 117 as y-height. 105 would be logical. It doesn`t matter how large the base-area is defined. It is everytime the same problem. 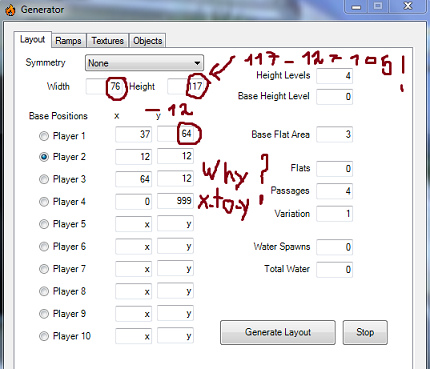 BTW, if people can post pics of the WYSIWYG issues (like, flame shows one thing, and the game has it as something else) that would be great as well!
/facepalm ...Grinch stole Warzone

Can't seem to load a map i started. Also, have to use process manager to force close.

Also I get in app error, sequence missing elements.

Not sure if this counts, but I can't find a way to actually get the SharpFlame .exe file to pop up in the SharpFlame.gui.Windows folder.
Top
Post Reply
8 posts • Page 1 of 1