Did you create a mod, map, music, or a tool? Present them here and earn feedback!
Note: addon requests do not belong here.
Note, everything uploaded to this forum, MUST have a license!
Post Reply
1004 posts

What map are you working on now Merowingg?

mero more asymmetric maps please i believe in your power

Guys, all of you that persist in asking him what map he's working on need to shush. Mero is a very busy guy, he has a life to take care of, and when he gets time he will work on a map. He is much more than simply a mapmaker give him some slack, yes?
"The one who looks on from the shadows and silently observes learns the most and is not shunned by either side"
Top

noname1208 wrote:Guys, all of you that persist in asking him what map he's working on need to shush. Mero is a very busy guy, he has a life to take care of, and when he gets time he will work on a map. He is much more than simply a mapmaker give him some slack, yes?

Just clarifying, I wasn't striking out at you, I know you only asked and that's okay. I was just getting it out there so that everyone knows

Yes, over the last 6 months Mero's focus has been Uni and X. All I can say about "X" is that it is not even in the same universe as WZ map making. That's sure 'nough. The Uni stuff has gone well though, and that's good.

Why asymmetric maps? Meros maps are fair and very good designed. Watch at the map Mantis for example. There is no reason to create asymmetric maps. Go to the addon-section and download all the mero-maps. Great work-like NoQs and Dudas maps. IMO.
In case the WZ-game ends in a draw , the game winner will be determined by penalty shoot-out.
Top

You should give a look on Maps from KYO. Pretty nice ones they are.
Holocaust and Genocide, both linked to Mass Slaughter.
Top

Yes Rman, you have noticed correctly, I have decided not to use smileys as the result of my devastating life events. At least until any significant improvememnt in the very nightmare.

NoQ, I read an article where it was said that we perceive smiley as smiley, only when it is in its normal position. The rotated ones as yours, are claimed not to be perceived as a smile. I dont know why and how did they check it, but I lost the link which I was to sent you. For sure your smiley turns attention.

montetank, I am happy that you like The Mantis so much, but please do not say I am working on something, rather suggest or imply.

noname1208, thank you very much for your wishes. And you are one of among few older members and people who reappear, that you know the "what are you working on" or "when will we see the new map" questions are rather common. There is nothing new in that and no need for defence. When necessary I will be simply out of here, what unfortunatelly was a fact in the latest few months. Also seeing the necessity of new maps is nice.

beholder33, thank you for nice words.

Hesterax, I am not working on anything since the last map. There was a time when mapmaking was a great escape for me, while listening to the music, typing here, and thinking limitless things. No I dont know if I will manage to simply sit like that and take pleasure. Lets say like the FB gives us trivial possibilities, "it is complicated" but I have more and more thoughts to sit and create again.

I also suggest Gentlemen to realise, that veryfying whether a map is to be symmetric or assymetric is as good as which maps are better, low oil, or high oil. The answers seem to be obvious for both groups, but again is there a point?

It is trye that I have far more symmetric ones, but I was about to create more assymetric ones. But I always have this tendency, to make players even. It reminds me of a game where on 8 players NTW, we had a guy in team, who was terrible, in meaning, when we had walls and half of the technological tree, he was building a factory, and had those funny few Bug tanks, and did not even leave his base. The best part was, saying nothing even to each other, we protected him with aour numerous fortifications. He was best protected of us all. We were even wondering if he knew he was online and know our existence. But is was so nice to see him to manage things in his "box" and he seemd to really have good fun. Although what he achieved a "typical" player have in first few minutes.. I think we won that game.

To sum up, maybe it is not always about desperate winning and shouting, but having good time and cooperation.

Thank you very much for all the posts Gentlemen,

I have to admit I enjoyed my warming up. Old memories, mapping, listening to music, contemplating on unlimited things, all at once.

The map is called Side Effects, because there are side effects to multiple things on the map. I mean things like placing two players at the side of the map, making them more vulnerable to attacks but giving a little bit more of oil resources. There are also some cruel passages and terrain unequalities. And I assume few more side effects, or shall I say I hope.

The hardest thing was to make things unequal, symmetry was fighting with me till the very end. Yes, it is not a symmeric map for me, as I believe, but the experiment itself very pleasing.

The map is for six players, so this is new to my works, four players have twelve oils "in base" and two remining have fifteen oils "in base", the quotation marks indicate that it is hard to define "in base" here. The rest of oil is here there and everywhere on the map.

The map have very advanced bases with weaponry of all kind.

The map is mainly for 3v3 or 2v2v2, be reminded that players 1,2 and 4,5 are very close to each other at one side, so their defences if played with advanced bases will start shoting at each other. Nothing spectacular, but destracting. Yes it was noticed, and leaving it be was intended, lets call it an exemplary side effect of close relations. Also the players 1, 2 and 4, 5 have 6 have 6 research facilities instead of 5, so there will be side effects. 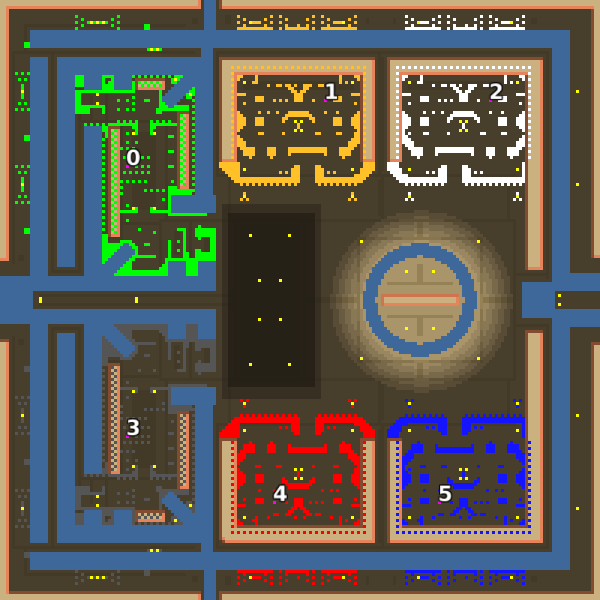 I got inspired by the map with the same name. It is called Centipede, because it is at least supossed to resemble of how a centipede looks like.

The map is for eight players. 250x65 so very wide, but short in lenght. There is four oils per player. Advanced bases are include with walls and mahinegun towers only.

The Woodlouse is the more insane version of Centipede. Even more narrow in lenght.

The map is for eight players. 250x52 so very wide, but short in lenght. There is four oils per player. Advanced bases are include with walls and mahinegun towers only.

Great to see you back into map making Merowingg

Thank you very much,

I believe I dont have to say why it is called Crocodile.

The bases here have 14x14 tiles areas, so very small. 4 oils per player. Basic structures in minimal amount with two machineguard towers at the gate. I have left some place if 10 player version was needed.