The place to discuss balance changes for future versions of the game.
(Master releases & 3.X)
Post Reply
8 posts • Page 1 of 1

You know, the ones "automatically assigned to nearest sensor or CB tower".

This is not true: Artillery emplacements can and will attack anything within anyone's sight or sensor range.

I noticed this in the Gamma 3 campaign mission. I'd wiped Nexus's Gamma base off the map, cleaned up all the stragglers, but the mission was not complete yet? Turns out there were four or five Nexus units sitting on top of that isolated hill on the extreme NW corner of the map, one of them a Vindicator Hover. (That explains where the SAM's were coming from, at least). I edge a sensor hover of my own into that area, and my Hellstorm emplacements start raining shells down upon them.

But the mission was still not over yet. So I send out a VTOL to scout the area, and discover there are 1-2 cyborgs still up on that hill, just out of ground sight range. My VTOL does not attack them (I didn't order it to) - but just as it's starting to fly back, my Hellstorm emplacements do and I get "Objective Accomplished".

Wait, what? Why are my defenses opening fire when I have nothing to spot targets for them?

To be precise, I did not have any sensor towers able to see them (I did have one tower nearby, but they were just out of range). And I'm okay with mobile sensor units being able to spot for artillery emplacements (commander-firing-support style). But I just flew one VTOL unit into the area, and suddenly all my defenses open fire?

This is just not right.

(It also explains why Beta 7 (capture NASDA central) is suddenly so difficult: Not only are there enemy sensor towers stationed near your LZ, but once any enemy unit approaches your LZ, your away team goes down in a hail of Ripple Rockets.)

Simplified example - try it yourself!

1 - Start a skirmish on T2 Sk-Rush.
2 - Build some Mortar emplacements around your perimeter power resources (the ones with hardpoints around them).
3 - Move a truck to the oil derrick at the edge of your sensor range (but don't build on it yet). This will bring enemy hardpoints within sight range.
4 - Your mortar emplacements are now shooting at enemy hardpoints despite there is no actual sensor within range of them.
5 - Return your truck to base; enemy hardpoints are now outside of any sight range but your defenses are still firing. In fact, they will continue firing until not just the first target is destroyed, but all targets are destroyed. 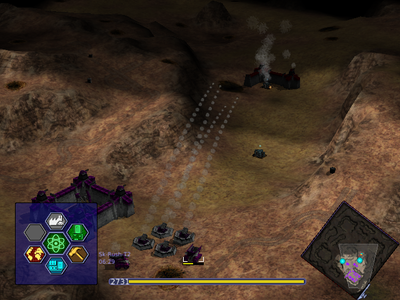 Notice how the mortars are attacking targets not within any unit's sight range.

Always been like that. I often use trucks to nose out the perimeter areas, pulling them back before whatever lurks there can fire. Then my range weapons take the lurker(s) out. Allow that the drivers/pilots (brave men all) are trained to do some spotting on the side...
Top 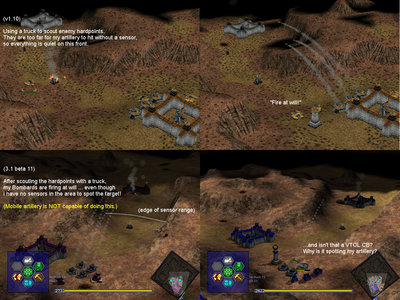 This is why Beta 7 is so difficult - once the Collective sends a few scouts (ground or air does not matter) to your LZ, you're on their sensor coverage and their Ripple Rockets nail you, even though your LZ isn't in actual range of their sensor towers. If you don't CB some Ripple Rockets of your own and pronto, you are just plain screwed.

This also hurts the usability of the Radar Detector which is supposed to silence artillery by targetting enemy sensors. It'll do that against mobile artillery units, sure, but enemy artillery pits won't fall silent if somebody somewhere can still see you, sensor or otherwise.

In other words, it gives artillery fortifications too much power over their mobile counterparts. Sure, mobile artillery gets experience benefits but fixed artillery pits don't actually need a sensor to spot their targets? If you can't do it with a mobile unit then your fixed fortifications shouldn't be able to do it either.

I know this is not necessarily game-breaking but it is definitely a bug-slash-balance issue that did not exist in the original.
Last edited by Stratadrake on 20 Aug 2012, 18:47, edited 1 time in total.
Strata @dA, @FAC
Top

If you don't CB some Ripple Rockets of your own and pronto, you are just plain screwed.

Doesn't a single bunker buster VTOL knocking out the only sensor tower around handle the issue well enough? I'm sure it worked in 2.3 (proof), don't remember in 3.1, but at least this proves that you can't leave the LZ without getting in range of an enemy sensor tower.
Maps | Tower Defense | NullBot AI | More NullBot AI | Scavs | More Scavs | Tilesets | Walkthrough | JSCam
Top

NoQ wrote:Doesn't a single bunker buster VTOL knocking out the only sensor tower around handle the issue well enough? I'm sure it worked in 2.3 (proof), don't remember in 3.1.

Yes and no. On the one hand, sensor towers have a 16sq. range so by taking it out (remember there are two of them - one normal, one CB) you can walk a few steps outside your LZ without coming into the personal (8sq) sight range of everything else. But once you do, they still nail you.

I also had several cases where I did not venture outside my LZ at all but enemy Ripple Rockets still found their marks the moment their first wave of scouts decided to say hello.

PS: Notice what's missing in the desert tileset? All those ugly green-grey dots were actually meant to be dry desert brush and scrub. Which would actually be quite beautiful. I think we need a new feature type on maps - "traversible vegetation".
Strata @dA, @FAC
Top

PS: Notice what's missing in the desert tileset? All those ugly green-grey dots were actually meant to be dry desert brush and scrub

PS: I notice it's no longer missing on your screenshots (even though it was missing before beta11). Probably it needs a bit clearer texture, but the difference is already quite visible.
Maps | Tower Defense | NullBot AI | More NullBot AI | Scavs | More Scavs | Tilesets | Walkthrough | JSCam
Top