Tried out the changes to the lancers and the funding on Beta 01 and both seem better, however I do have a couple of other observations.

Firstly I don’t think the player should get HESH Rockets mk3 on Beta 01 because each upgrade is giving 48 points of damage for a total of 144 points of damage and give that your lancers start
Beta 01 at 304 damage that is an upgrade of almost 50% which is too much.

I do think the player needs at least 1 damage upgrade because without it the early Beta levels can actually be a struggle.

Second I'm of the opinion that the Lancers / Mini Rocket upgrades should be decupled from the cannon upgrades I don’t know why it was set up that way but I don't see what cannons have to do with making Rocket weapons better, having to do the Mini Rocket stuff before you get the lancer equivalents kinda makes sense since they are similar weapon systems but I don’t see what cannons have to do with improving rocket weapons therefore I'm of the opinion the prerequisites should be swapped around a bit.

Here is what I would go with

HESH Rockets mk3 should be moved to a later level

Not only does this make more sense but the ordering is consistent with the way mini rocket / lancer upgrades are ordered in alpha 06.

As for the rest of the research I think the ordering is fine and can be left as is.

Third while the damage level of the collectives lancer tanks and turrets is fine now I'm of the opinion that the collective Lancer VTOLs still need further adjustment because they are still one shotting my heavy body tracked lancers, or if they miss a shot reducing them to something like 200 hp from 1909hp so clearly they are still a bit to powerful
Top

Berserk Cyborg wrote:Pushed e4b71137eff696e16727cd3fb0f02f2ab4f7fd45. I did get to bringing back the mock battle between Nexus and Gamma. Is the mission too difficult? It kind of looks overpowering when the player enters the trap area.

We'll see. I think with two combat groups, one in the east and one in the west it is possible. Maybe we have to adjust the spawn times, but I want to play the level first before I give any suggestions. I don't know what to think about the reduction of the rescue time. On the one hand, it was 30 minutes in 3.1.5, on the other hand, you don't need so much time. I'll give you my opinion as soon as I played the level.

I have a look at the code of gamma 4 and I think this would become too difficult. If I understand the code right, all three phantom factories will produce up to 15 random units every 2 and a half minute. With insane difficulty, this time gets reduced to 1:40. And that means that you have 30 produced units plus the units that were already on the map against you when your first transport arrives. That's too much. In 3.1.5 the NE and the SW phantom factories only produced cyborgs. If I remember right 4 in the NE and 6 in the SW. Only in the SE random units. That's better to handle. And I think you should give every factory an individual spawn time. My suggestion: 3 minutes for NE, 4 minutes for SE and 6 minutes for SE, production starts when I can bring in reinforcements and vtols should be two alternate groups like I suggested for gamma 3. One group 4 bombers, one group 2 scourge vtols, alternately every two minutes, like in gamma 3. That would be more like in 3.1.5.
Top

Pushed Bethrezen's Beta research order suggestions and made Gamma 3 & 4 alternate VTOL templates. And made Gamma 4 use separate phantom factory timers along with less units. c7bb50bec81a4f9a12632850271fb144bc013dc8. I highly suggest not being on a mission where VTOLs are being spawned and if anyone is on Beta, you may as well start that campaign over again.

I made HESH rockets mk3 depend on having the ripple rocket researched for Beta campaign.
Top

I updated to master e4b7113 and started testing gamma 3.

If I remember right you were able to pick up an artefact with a vtol in 3.1.5. In gamma 3 I couldn't. See the picture below. Is that intended? 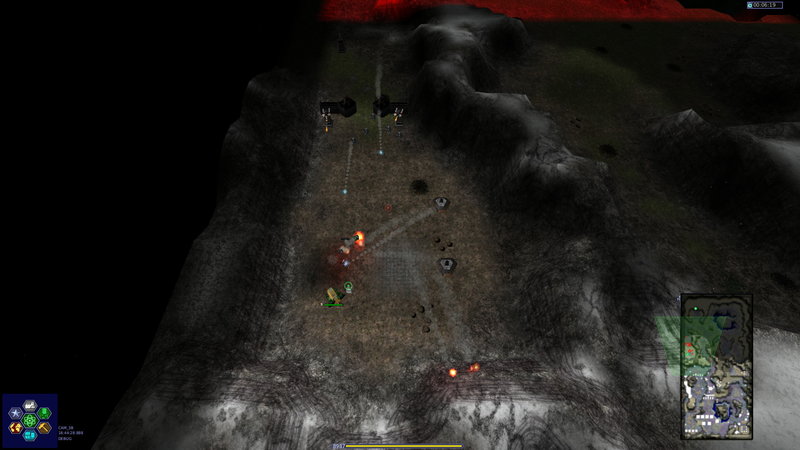 Alfred007, could you tell me why your radar frustum is green?
Top

Forgon wrote:Alfred007, could you tell me why your radar frustum is green?

I have no idea why.
Top

I think it is a feature. There is a switch statement in setViewingWindow() within radar.cpp that hardcodes a green color for campaign 3.

It says not to allow VTOLs to pickup stuff in the order code. So I guess it is intended now.

I updated to master beba57f and restarted testing gamma 3. It's extremely tough and I needed several tries before I survived the first wave without a loss. Really worth to call it insane. Due to the fact, that I want to gain as much experience as possible I let both bases and the gamma factories alive and especially when the nexus transporter lands in the western base to the same time the land reinforcements arrive it's getting hot. I think we could the production time for land reinforcements let at 4 minutes but should increase the queue before the production starts to 5 minutes so that the transport units and the land reinforcement units in the west get less often unite. 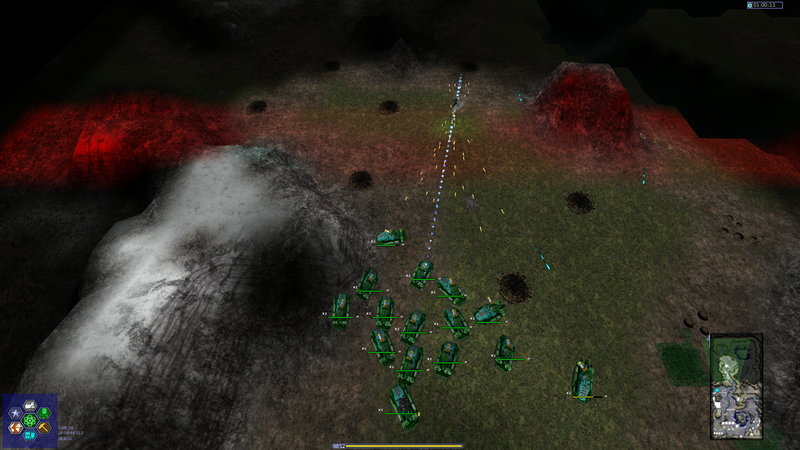 Second, and worse, the level doesn't end. I add a saved game when all enemy units and buildings are destroyed and there is still a blip for a base. This is not the original blip for the eastern base but is made by the landing Nexus transport. After I destroyed the western base the transporter only landed in the eastern base as he should, but creates this base blip.

I also add adjusted assemblies for gamma base factories.

Oops, too fast. mockBattleTrigger removes the alliance between Nexus and Gamma base so that Nexus can attack and destroy part of Gamma base and activate the Nexus groups. Will make it last longer. trapTrigger is only useful to immediately take over Gamma base should the player try rushing past it.


alfred007 wrote: Second, and worse, the level doesn't end. I add a saved game when all enemy units and buildings are destroyed and there is still a blip for a base. This is not the original blip for the eastern base but is made by the landing Nexus transport. After I destroyed the western base the transporter only landed in the eastern base as he should, but creates this base blip.

Looks like it thinks Gamma base has not been eliminated. Could you upload a save on Gamma 2? Pre-away mission or not is ok.
Top

Berserk Cyborg wrote:Looks like it thinks Gamma base has not been eliminated. Could you upload a save on Gamma 2? Pre-away mission or not is ok.

There you have it.

I guess it though Gamma base was an ally so that it did not need to add anything to the base. Wonder when that started to happen.
Top

Had an issue where the hammer symbol was still illuminated when I had no trucks.
When I click it nothing is displayed at the bottom center.
Top

Forgot about the transporter blip. Will fix that in future commit.


OFelix wrote: Had an issue where the hammer symbol was still illuminated when I had no trucks.
When I click it nothing is displayed at the bottom center.

Happens with multiplayer as well. Don't know why, but trying to update the reticule buttons when called from eventDestroyed does not work if called immediately. If I queue it 100ms later then it updates the state of the reticule button. Rules.js needs to subscribe to eventObjectTransfer to update the build button should a player be gifted a constructor droid should they have none.

I updated to master df29772 and tested Gamma 3 again. Now I could finish the level. Looks good so far. Two thoughts: You should set the time for the rescue part back to 30 minutes. For normal difficulty, it will make not really a difference, but especially with insane difficulty you need all the time you can get to store power. The preparation for Gamma 5 costs a lot of power and with the power limit of 16,000, you can get some problems. And I think every land reinforcement should be set to a minimum of 10 units. Range up to 15 is ok, but there should be at least as many units like in a transporter. I will move on with testing Gamma 4 tomorrow.
Top

I'm wondering what do you think about giving the units that you rescue on Beta 02 some experience to make Beta 02 a bit more worth while, because right now those units are only good for recycling as soon as you get back to base because they have no experience, not to mention the fact that cannons are pretty worthless anyway because they are simply to weak to effective I mean they have more or less the same rate of fire as lancers and about 1/3 the damage and yes you can argue that they have heavier armour which is why they are not as powerful but ultimately you don't need heavy armour if you can kill your opponent in a matter of seconds, you only need to be able to survive long enough to get your salvo off and crush what ever you are shooting at before its gets you, which is why i generally use lancer over cannons even though cannons are more heavy armoured.

also with regards to Beta 02 would it be possible for the units that are at the crash site to be the actual units that where on the drop ship should the player try to bring in more then 40 units rather than some worthless generic newb units so that the player isn't loosing experienced units on transition, now before you say it yes i know you can recycle your excess experienced units and then rebuild them on beta and doing so will allow you to retain the experience they have earned having said that this fact isn't necessarily obvious to new players, so i feel like a slight change to how this works is in order well assuming that its possible that is, and obviously if you only bring in 40 units then you just get 10 generic units on beta 02 as you do currently.

Also I'd check your fix to stop players resuming and completing a level they have already failed because it seems a little buggy.

as you can see in the first screen shot when I open the load screen the game over screen is still visible in the background which is incorrect.