Get some help with creating maps or modding.
Need a map editor or other tools, look here!
Post Reply
20 posts

I don`t think, every map maker is reading this topic.

There's not much to read until the patch is actually merged and a new game version is released. You cannot make maps with this yet, just at most test and see if it is going to work some day. I think it should have been done earlier, as the problem was well-known and the fix is trivial. You can already use the FlaME dataset, of course, but the new tiles will not work.


I am just testing the "new" campaign.

About the tiles vs textures debate: I specifically remade the cliff tiles to be "shading decals" on top of the texture. This way we can use tiles while simultaneously having unique texturing. However, in some cases you can still see the tiling effect.

I haven't looked at these in a while, but one option would be to make them even more transparent so that they blend more with the underlying texture. Also I could make stuff like end-tiles (cliff decals fade out) and maybe even Y-tiles (assuming I can find some free time, that is). Only problem is of course that this would require reconfiguring the tileset and adding more cliff-type tiles.

Jorzi wrote: Only problem is of course that this would require reconfiguring the tileset and adding more cliff-type tiles.

My problem with the Arizona-tileset is not the cliff-decals. It is a pity, that FlaME don`t use the diagonal clifftile nr. 18 in the automatic-brush. It looks not very good (IMHO)

I need about 5 minutes to correct a mountain manually. A new map editor wasn`t be bad. To explain what i mean 2 screenshots. 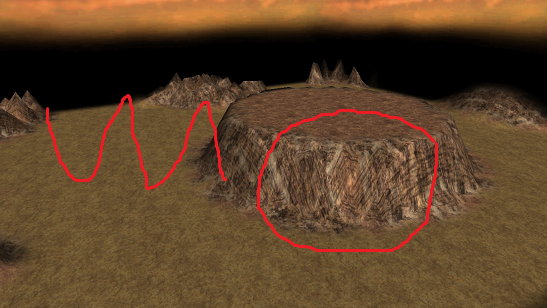 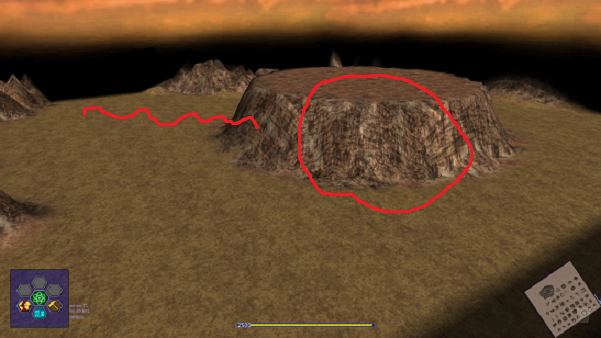 End-cliffs are actually badly wanted, both orthogonal and especially diagonal (as most of our cliff ends are diagonal). Not sure about Y-shaped: at some point, i started to completely avoid three-way joins of cliffs (by deliberately designing a heightmap that wouldn't produce those at all; as far as i remember, Riviera was made that way).
Maps | Tower Defense | NullBot AI | More NullBot AI | Scavs | More Scavs | Tilesets | Walkthrough | JSCam
Top

Is there any thread that has a list of improvements that are wanted / needed for Flame/sharpFlame updates ?

Edit, I didn't see any, so I made a new thread: here
/facepalm ...Grinch stole Warzone