by NoQ
I'm finally working on a "play for scavengers" mod that will turn wz into a simple classic RTS with a relatively short tech tree, many different base structures and few fixed unit templates (thus "mini"). It will incorporate most stuff from the scav AI mod.
Here is the complete tech tree, should be pretty easy to remember.
I could use some help with TCMasks for the scavenger models, cause most of them don't have player colors showing up anywhere right now.

I'm intending this to be mp-balanced, if possible, throwing away the current scav stats; of course it'd require quite some testing to achieve, and of course the stats may change in the process.

The mod includes two sorts of labs (you need to have an advanced lab actually built to carry out advanced research, like rockets, mortars and choppers), two sorts of factories (some tanks like bus and firetruck can only be produced in the heavy factory), two sorts of construction droids (the excavator is building faster than crane, unproportionally expensive and hard to destroy; use it to build on unsafe spots or when you are at truck limits and still want more).

This mod includes a skirmish AI called NullBot ~Mini~; no other AI is known to work with this mod, so make sure you select it when you want to play a skirmish game.

by Iluvalar
Excavator : The engineering function is a producing function, it doesn't grow like that. Since you have to pay for all things, doubling the speed doesnt double the value at all.

by NoQ
Well, it does have its HP doubled as well, and has improved armor. It's actually better than two cranes in all aspects.

by Iluvalar
I missed the "improved hp" aspect. My bad...

Btw, it's not lancer, they really have those distinct "micro-rockets". Could you please make them appear first ?

by Iluvalar
"micro-rockets" (NRS name), lancers, tank killers and scourge all look like "lancer". I tought it would be a good idea to spread them as much as possible, so I put the minipods between the "scav lancer" and the real lancer.

by NoQ
Well, there's no real lancer here, how am i supposed to separate it?

by Iluvalar
Wow, we sure have a communication pb here

I'm asking you to put those lancer-like scavenger rockets before the mini-pods for 2 distinct reasons :
A) That would explain why the project never botter with the micro-rockets tech.
B) That's was I chose for NRS as well... Just for consistency.

I wont debate more abou that because that's really a small detail. lol. didn't expected we would fill a page with that

by zydonk
Good to see a dedicated mp version of WZ being offered, after years of trying to torture the original game into some kind of mp shape. If this works, then maybe the mainline offering can be restored to something like its original shape. (As it is, the 3.n now has a specific mp .wz, so in effect that version could be rebalanced back towards the original - before it becomes even more absurd ...

by NoQ
Finally added a pre-alpha download to the first post. The current status is as follows:

by NoQ
v0.01: fixes a lot of weird stuff and obvious errors found in the pre-aplha.

by Andrie
I have a problem 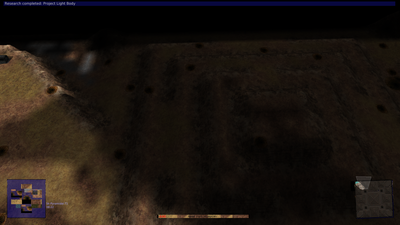 Problem with my menu and power bar! Hope it can be fixed!

by NoQ
I'm not having anything like that. Does this problem show up all the time or after some time? Did you ever see it without this mod? Do you have any other mods installed?

by Andrie
It's just a problem with this mod and it's like that all the time!