Did you create a mod, map, music, or a tool? Present them here and earn feedback!
Note: addon requests do not belong here.
Note, everything uploaded to this forum, MUST have a license!
Post Reply
429 posts

Goth Zagog-Thou wrote:Now, now. Let's hear Delphino out. That's what the thread is for.

Delphino, feel free to make your case. I will answer honestly and objectively, and I always always appreciate constructive criticism.

The thing is Goth, he seems adamant about NOT giving any specific examples of what he's refering to:


aubergine wrote:I what way is it not warzone-like? Please give specific examples, eg. "this bit works like <describe> where I would expect it to work like <describe>".

Just being diplomatic is all.

A good thing too.

I'd love to hear him out myself. The whole notion of "WZ-Like" & "Not WZ-Like" is a topic we covered at great length at rts.net after Alex M. told us that the source would finally be released in a few months. 2 things resulted from these extensive development discussions the autumn of 2004.

1.) Modularize the game framework as a precursor to any sub-system improvements.

2.) Create far greater mod support so modders work would be facilitated and they would be free to go wherever their vision led them, while the vision of the original was preserved. IOWs, externalizing all potential "Not WZ-Like" creations while still fully embracing their legitimacy to exist and be supported as valued contributions to the post-liberation canon.

I have test ver.13, but is still bumping me to desktop screen. Is that mission failed or what?

How far in does that occur? It shouldn't be crashing to desktop under any circumstances.
Top

Its happen when I clean out the scavengers, or in nexus base.
I cant get any other map to play on, if there is any.
And there are good improvements on the map I sow.

That's a bit strange. Are you playing with any other mods enabled, other than Cam 4? If you're playing with anything else loaded (like NTW) that would cause something like that. That's the only time I've ever heard of Cam 4 crashing like that is if NTW was loaded as well.

Release-14 will be out soon. Lots of little fixes. You'll like the subtle map changes too. I've been very busy so Cam 4 has been on the back burner.
Top

I saw that bump (on previous versions of WZ 2100) before I try your mod.

Sorry, I have played more than you think, this, the WZ2100 game.

that can't bump me to desktop so often.
Your Cam4 may be? I'm telling that, I'm back to desktop, when I use this mod only.

Issues seem to abound on Vista and Win 7 while using Cam 4, for no good reason. I need to run the game in 'XP SP3 Compatibility Mode' on those. My XP and Xubuntu installs, the same Cam 4 compile runs flawlessly.

So I go back to what I said before about Vista and Win 7 having issues with the game itself more than anything with the Cam.
Top

Goth Zagog-Thou wrote:Issues seem to abound on Vista and Win 7 while using Cam 4, for no good reason. I need to run the game in 'XP SP3 Compatibility Mode' on those. My XP and Xubuntu installs, the same Cam 4 compile runs flawlessly.

So I go back to what I said before about Vista and Win 7 having issues with the game itself more than anything with the Cam.

Its clear, I think, but life is so busy, when there is so little time left.(Can you see a fast car on the road?).

He said nop cant load it on OS Win7.

Please don't tell me, it works nice on OS Ubuntu.
Its always something wrong. For example just me; I'm trying from beginning this cam 4 mode many times.
And that's the spirit I wish to play this mode too. But I don't know haw.
When I came to mission that scavengers can alert nexus, if I'm to slow in cleaning their bases, exactly that bump,
there is no mission failed screen, just my old known desktop screen, that I talk about is ( bump ).

Good news, folks. We're running (mostly) on the not-yet-announced 3.1_beta11. I say mostly because there's a curious issue with a single team having more than 5 factories. But the dataset is working now.

Soooo. What I'm doing is splitting up the Scavengers into a couple of different teams. The Red Alphas make their debut in M2 and again in a big way in M6. The "Purple Team" (Player 6), well, I haven't decided who they are yet or what the story is concerning those guys.

The locale for the Campaign has changed now too (and so has the tileset!). We're operating in the extreme southern tip of Alaska, working our way south towards Seattle. Why? Because it fits more into the official storyline that the Pumpkins laid out.

And it just looks too darn cool NOT to use it. 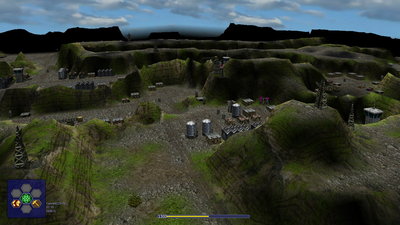 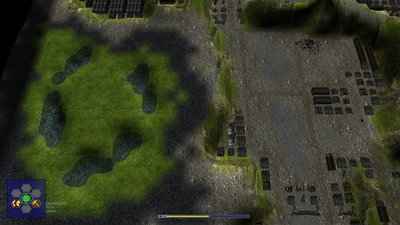 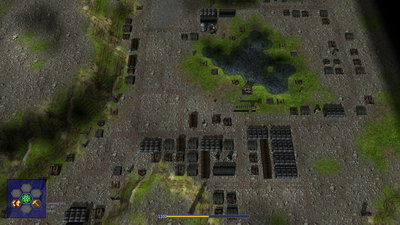 The textures? Mysteryem's stuff. That and the cliff decals added in _beta11. The skydome is Urban.

Yes, it's a little hacky... that's what this Campaign seems to be all about anyway.