Did you create a mod, map, music, or a tool? Present them here and earn feedback!
Note: addon requests do not belong here.
Note, everything uploaded to this forum, MUST have a license!
Post Reply
50 posts

thanks for the kind words.
I made a new map with better rainforest terrains

Post it in one of those places where you can put anything, like mediafire, and just give the link in the post.
My maps: http://forums.wz2100.net/viewtopic.php?f=10&t=9501
Top

.
You have to start with advanced bases to be able to survive the scavs rush at the beginning.

Hope you enjoy, ah... and don't forget to protect your derricks 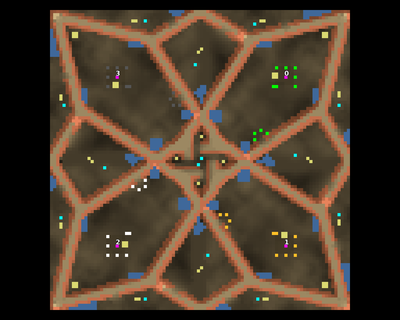 On Emerald, using FRC build order, before my lab is even 20% complete I'm swarmed by scavs after which point even producing more trucks is doing little more than to provide them with more cannon fodder.
"Dedicated to discovering Warzone artefacts, and sharing them freely for the benefit of the community."
-- https://warzone.atlassian.net/wiki/display/GO
Top

Aubergine, the last time I played emerald, with 1 allied hard Nullbot against 2 insane nullbot and the ultimate scavs.
Simply building 2 cobra/ht hmg and a repair facility at the very beginning I was able to survive the scav rush.
And slowly rebuild the destroyed derricks...

Otherwise all those maps are always the same... boring thing

BTW, I updated Emerald to v1 because hovers was able to cross a single cliff tile, near the water, close to the center map.
Top

Ah, I assume you play emerald with basic base structures enabled (and also techs like cobra) - it might be worth stating that as a requirement alongside the map description above?
"Dedicated to discovering Warzone artefacts, and sharing them freely for the benefit of the community."
-- https://warzone.atlassian.net/wiki/display/GO
Top

Yes, you are right.
Top

Hey Felipe,
Great maps, these are really cool. Keep it up.

Can you help me, I want to know how I can render my maps with the same tiles you use in Hell and Auberforest etc?? I don't have the mods installed; yet I still play them with the scenery you have done. I use Flame to create maps. Is there a set of tilesets to download that I can use in Flame or is there a certain thing you do in your map editing that tells the game to switch the tilesets to volcanic, hell or rainforest??
How the hell can I recreate hell??

Slartifartbarstud: Here are the hell and rainforest as mods.
The palms tree and crystals, once the mod is loaded, replaces the boulders that you put in your maps with FlaME.
Boulders are indestructible, and so the palms/crystals.
The craters tiles are replaced with bush and palms leaf (in reainforest) and magma craters (in hell).

If you want to release a map with embedded tilesets (like my maps) all you have to do is:
rename yourmap.wz to yourmap.zip (I think in windows you need to do this).
Unzip it.
Like before, rename mod_hellxxxx.wz to mod_hellxxxx.zip
Unzip it.
You should have 2 folders now, so copy the content of the folder mod_hellxxxx in the folder yourmap.
Zip again your map and rename the zip file to .wz

p.s. I played your maps quite a lot and took some ideas/inspirations. Make more

Shadow Wolf TJC mentions in Contingency topic that he found a way to make destructible palm trees - might be worth taking a look to see how he did it and update the maps?
"Dedicated to discovering Warzone artefacts, and sharing them freely for the benefit of the community."
-- https://warzone.atlassian.net/wiki/display/GO
Top

In order for me to make the trees and crystals destructible, I added a few features into features.txt that use the palm tree and crystal models, though it wouldn't replace any boulders with them. Alternatively, I could've replaced the boulders' .pie models with that of the palm trees or crystals, but then I'd have to make the boulders destructible in features.txt.
Creator of Warzone 2100: Contingency!
Founder of Wikizone 2100: http://wikizone2100.wikia.com/wiki/Wikizone_2100
Top

If you use this mod with already made maps, boulders were and stay indestructible.
In new designed maps, if you make them to be used with those tilesets, IMHO is fun to use indestructible items to block passages when/where needed.
Otherwise the only way to block the passage of all kind of droids is with cliffs.

Aubergine, if palms becomes destructible I need to re-think my maps.
Top

Using a tree as an indestructible object is somewhat odd though. Having indestructible crystals or boulders is fine, but trees just seems odd -- if a tank can blow up a building, a tree is surely no match?
"Dedicated to discovering Warzone artefacts, and sharing them freely for the benefit of the community."
-- https://warzone.atlassian.net/wiki/display/GO
Top

No features should be indestructable, IMO. You can, however, vary what it takes to destroy a feature.

A huge granite boulder should take a whole lot more to destroy than a pine tree.

When I designed cargo containers as a construction feature for scavengers (16 entirely new feature objects, btw) they were very hard to destroy but not made to be indestructable. Essentially extending the Urban Feature set potential (of city buildings) to the non-man made Arizona and Rocky Mountain natural features. There is still great untapped potential in the man-made features of the Urban set to make game play deconstruction of maps. Untapped mainly, I think, because stock original urban building features are so artistically poor that they are uninspiring to work with.

Using features to make canyon blockades (like from a land slide), for example, can expand strategic gameplay in MP. Did this with giant boulder features that blocked advantageous geography and resource assets but though they were very hard to destroy, these giant blockadeing boulders were not indestructable like cliff face (course you can make 3d model cliff face features that can be made destructable, albeit with great difficulty. This works beautiful too.)

Again, think of it as map deconstruction through gameplay by design.

Certainly in designing your maps this degree of feature destructability (time / power) is a crucial consideration and therefore merits some basic standardization, across all the feature objects, that makes common sense.

Updated hell and rainforest to v2, now the palm trees and crystals are replacing the Snowy Trees.
For the joy of everyone now they are destructible.

felipe wrote:If you want to release a map with embedded tilesets (like my maps) all you have to do is:
rename yourmap.wz to yourmap.zip (I think in windows you need to do this).
Unzip it.
Like before, rename mod_hellxxxx.wz to mod_hellxxxx.zip
Unzip it.
You should have 2 folders now, so copy the content of the folder mod_hellxxxx in the folder yourmap.
Zip again your map and rename the zip file to .wz

I think this is easier!