Hello,
I'm playing Warzone since PlayStaion1 and I play through the campaign again every few years since then.

In 3.3.0 on normal difficulty I'm experiencing the enemy creating units and recieving transports in insane amounts.

I've allways played throug the entire Alpha Campaing with no more than 10 Units (leveled up from first mission by repairing and recycling).
This way you can play with strategy and tactics, and to me this it's exactly what seperates this game from others.

But in 3.3.0 you cannot win with tactics anymore.
The enemy spams units like crazy, and the only way to win is do the same.
Thats no fun and verry boring. It's just click click click....
(well, actually i was able to advance to the last level of alpha campaign with my 10 units, but no chance from there on)


I've read a few other experienced players have experienced this too.
But my question is, whats the latest Vesion, where campaing is not broken?
I also have 3.2.3 from my last playthrough, where everthing is as it should, but that lacks a lot of usefull features and fixes from 3.3.0. (which really is a great version except from this. thanks for that!)

Funny thing is, in last Alpha Mission the rate of enemy units suddenly slowed down.
I did sens some units into the base, and have seen this: there are so many units, that the exit is jammed an the enemy can't send them out anymore.
(see Screenshot) 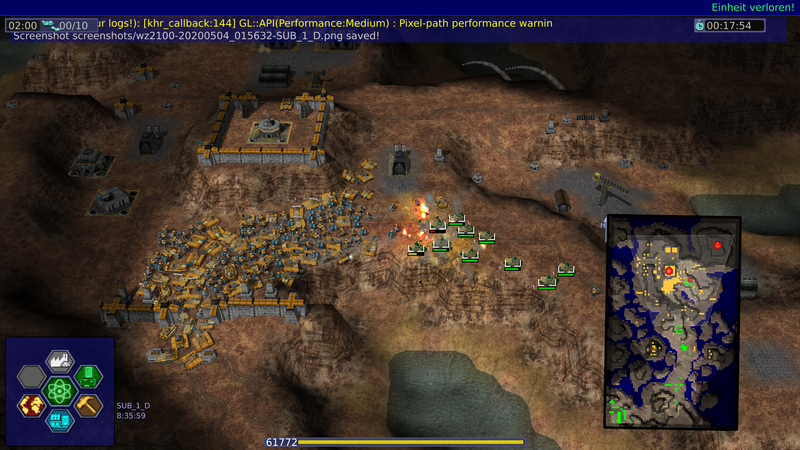 Campaign isn't broken, you just fell victim to a rare timing situation where a lot of units were trying to repair and got stuck in that tiny gap when other groups were trying to go out. Thus they piled up. With 9fa9b8ca09e257cb96cc86a4ad937c3f8a1adfe7 the units on this mission won't repair as much and will be slower to produce (ie., more spread out) for the 3.3.1 release.

Feel free to try a development build to continue with your current saves, provided you still have any before going into that offworld mission (you'll need a github account to access the builds). https://github.com/Warzone2100/warzone2 ... ent-builds. But if you don't want to do that (or the 3.3.0 saves aren't compatible with the dev builds) then I'd recommend using 3.1.5 until next release since 3.2.x campaign is very buggy and took a long time to mature (see about the first half of that thread as an example).
Top

Thanks for your reply! I will try that.

It's less this traffic jam I'm complaining about, this gave me a little time to breathe

And also the weaker large MG is ok.
But the rate of production and enemy transports seems insane. I've noticed this also a few missions before, but the last alpha mission is just too much.

I've played through the alpha campaign in 3.2.3 on Friday, and then realized there was 3.3.0 and started over on Saturday, so I had a verry good comparison.

If I had a vote, I would set the campaign back to its standards, and add some difficulty levels above it. So players who like the original and players who like it harder would both be happy. (I switch between both groups;))

Thanks for keeping this game alive!
PS: I would also vote for higher gamespeeds than 1,5

I have played the campaign several times. I also have been considering to go back to a former version of the game, because I am also having problems with the last alpha stage. My difficulty setting is insane. Are there actually people who finish the last alpha stage in insane mode in 3.3.0? I can try harder, but this stage is just impossible, imho.

On this mission I use one Main Battle Group. A hero commander with 22 hover attached units: 7 heavy cannons, 5 lancers and 10 heavy machine guns. I am stuck at the outer entrance of the base, where the enemy repair tool is placed. The New Paradigm just keeps spawning new units at this location. I doubt I can beat this stage with 2 Main Battle Groups, also the limit is 40 units. Whenever I advance in this stage I place defence lines of lancer and heavy machine gun bunkers.

Nonetheless, I am going to donate, because I still have been having fun with this old game.
Top

Please do try the latest development builds, because a number of bugs affecting the campaign have been fixed. (See Berserk Cyborg's post above.)
Top

I have an github account but I can't figure out how to get the developer builds. Where exactly do I find them?
Top

jemandanders wrote: ↑
06 May 2020, 18:34
I have an github account but I can't figure out how to get the developer builds. Where exactly do I find them?

Jemandanders, WRT to changing max gamespeed, there is a note in the source code that changing gamespeeds to arbitrary values may break the game. So perhaps that is the main reason we don't have more liberal limits.

But it says you can activate "debug mode" and then increase the speed somewhat more.
Top

That note about breaking the game is probably from the old days when Warzone 2100 was coded as an RTS, and a long time between frames would mean projectiles or droids would be more likely to miss where they're trying to go. Now there are always 10 logical frames per second, independently of the graphical frame rate.

So increasing the game speed even to 100× doesn't break the game. Might make it hard to click on moving droids, though.
Top
Post Reply
9 posts • Page 1 of 1