Warzone 2100 just showed up in my feed on steam. Was very skeptical at first thinking someone else had compiled wz2100.net's build and released it but I was presently surprised to see you guys actually did the release!

Unfortunately, we did not do the release. (Your initial skepticism was well-placed.)

raf2486 wrote: ↑
15 Mar 2020, 02:38
Someone made the game available on Steam. And I would hate to see them take credit for all of our community's hard work testing, modifying, and continuing to develop the game. Does anyone know if this was approved in any way by the community?

Unfortunately, that basically appears to be what has happened. This is not associated with any of the developers, the community, the Warzone 2100 Project, or wz2100.net.

A number of concerns were raised with the individual behind this (prior to its publication) that have not been addressed. Beyond the fact that the game was / is not yet ready to be published on Steam (due to bugs that still need fixing), which is why the actual development team has not done it yet, this Windows-only Steam release was packaged incorrectly and actually has some broken functionality. (So, unfortunately, we can't even necessarily help people who encounter issues with the Steam upload.)

The above still applies.
Top


Ugh, that really sucks. After quick skim of the GNU public license, it doesn't seem like we have any official recourse but I wonder if valve were to receive enough complaints, they would pull it.
Top

After looking at the file structure, an looking for updated license/author information they did NOTHING! They literally compiled an exact clone (incorrectly as you put it) and uploaded it to steam. No changes what soever.

I am seeing some of the reviews claiming saves and some missions aren't working.

edit: On reviewing the other thread I've seen that this community is aware who posted it
Top

Someone else published our Windows release on Steam. From what I'm seeing it looks like they will only mirror our releases. As per the license there isn't anything wrong, that I know of, however. Not sure what this means when/if we want to release on Steam some day.

According to pastdue it's packaged incorrectly and is causing a whole myriad of issues we just haven't seen ever reported. I skim through the Steam board and have seen strange things. Be it issues with saving games, creation of crash logs, creating screenshots and so on. Proper documentation isn't provided anywhere and I've seen many users stumped on how to use mods/maps/addons, how to host games, how to use the display scale feature for bigger screens, change difficulty settings, etc. Even the minimum system requirements state "Windows 2000" which is false: It's Vista+ with OpenGL 2.1+ compliance. Given that sampling I would have to agree.


I am seeing some of the reviews claiming saves and some missions aren't working.

I'm very much under the impression it's a bunch of new players who just don't know enough how the game works or have not developed necessary skills to play the game efficiently yet. The Easy difficulty option exists for a reason. To date, everything seems fine. (I've only touched the campaign mission scripts 3 times since 3.3.0: one to fix a very specific victory issue on Alpha 11, another to fix a game-over issue on Gamma 3/5, and to make Alpha 12 easier). If not, they should make issue reports since I can easily amend actual campaign issues.

We aren't quite ready for Steam. While we do have bugs the vast majority of the ~160 issues (if that), are minor in nature. It's mostly because the entire development team takes turns being like Atlas. These days it's mostly pastdue, Forgon, or I doing stuff. Sometimes a random passerby wanting to contribute what they wanted to do. Which means things are pretty slow to move.
Top

I tried to post there a few times, first time I got banned for 24 hours, trying to say that its better to download from WZ2100 suppprted builds, but the commander clearly took offence with what I said, and deleted my posts as well. Another issue people on steam dont seem to realise or care, is that the steam build is buggy. and this commander guy not replying to any bugs or issues. (he might not have complied the build, someone else did)

Then one of the users on the steam forum been taking issues with what I said. Overall, I just stopped posting there, but I also think that once a new build is released, it will be mirrored and uploaded to steam, and taking all the credit for it. or giving zero credit for the devs here.

But I seen a few posts reporting issues, so its not a stable build. Just wish people on the steam forum would realise this. Instead of saying, its opensource that matters enough.
Top

Just today I found it on steam and was this extremely overjoyed!
Then after some look at the reviews while downloading saw some errors mentioned and not working bug trackers and bad support which made me wonder what's going on. Also there was a developer/publisher "Underdone Gaming" which I've never heard before so did extra research here.

And now I've seen, that my scepsis was correct and it is not the "official" release finally on stam, what a shame

nevertheless I've found a statement of those steam-developers, that their release would be a fork of the 3.3.0 with improvements.
If it is a fork and not this original, is it still allowed to have the same name and bring this confusion?
And does it also link to every official thing on this site, if it is not the same, but a fork?
Link to website and manual all link to wz2100.net...

Here a link to the discussions thread on steam with the question which version is used for this steam-release and the reply of the steam-developers:
https://steamcommunity.com/app/1241950/ ... 321130965/
And also attached so I don't know if it is possible to alter the posts afterwards in the steam forums.

PS:
I really love this game since it came out 1999 and also have it in its original cd form in my shelves, so I can't agree to someone stealing it and claiming it for himself after all this work put in by other people 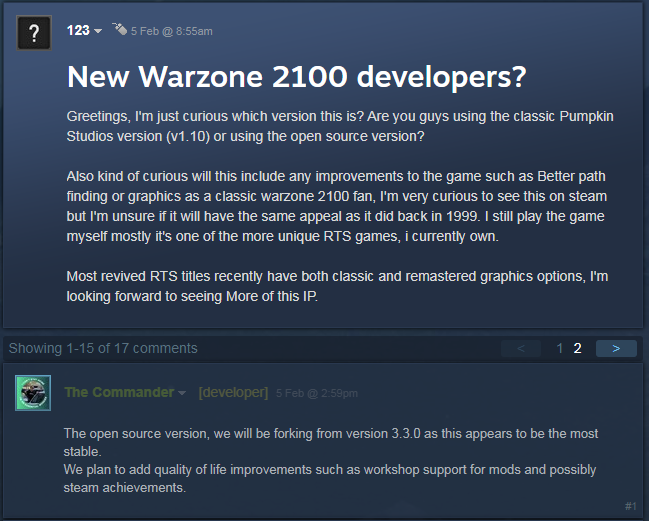 That is indeed interesting, I wonder if the Commander knows this or not? but if he does push ahead with workshop support, then that would be a clear violation of the GPL.

But yeah, the release on steam should be avoided.

Just a heads up, I would be real careful on what you say on the steam forum about the release, I got banned for trying to point out some of the issues. So this commander seems to have a short fuse when it comes to people pointing out problems. Then again, he doesn't seem to be on the forum that much anyway. So anyone who has issues, like text not appearing or crashing. He is no where to be found. So its a deal release without any support what so ever. But try and tell them that, and you will have one fan boy who might jump down your throat. So I stopped posting there.
Top

but on the other side he is uploading and so advertising a game with false information like that it would be from here, and that support would be available here.
Wesite etc all link to here...
?
(edit)
And additionally if he isn't able to upload a correct package of this game, than it is ruining its reputation

@matthewfarmery
thanks for the warning

Seems he has deleted my post, Titled, "what are your plans commander?" Like I said, this guy has a short fuse. But still, he seems to rarely post, if hardly at all. And hasn't really acknowledged any of the game's current issues. (steam release) no bug reports, no help from him. This is a low quality release. He really not doing WZ2100 any favours by releasing the game on steam. Especailly when he has given zero credit to the people here. They just don't exist. Real slap in the face.

So yeah, be careful what you say over there. Otherwise, you may find your posts deleted without warning.
Top

Good 'ol Dirty Dev behavior. SidAlpha should make a video about this.
Top

IMO this is not inherently bad for WZ publicity. So as long as Steam lets him, I'd say leave him be.
Top

From "The Commander" on the Steam forums:


wz2100.net release 3.4.0
The wz2100.net version 3.4.0 has been released here on Steam.
This release is not officially supported by the dev team from wz2100.net but is provided here for ease of access.

This is at a minimum misleading, if not extremely inaccurate.

The Steam release of 3.4.0 cannot be not supported, as The Commander has improperly packaged it again, and this impacts our ability to help debug issues or crashes.

If you have issues, please install the wz2100.net download and we can actually help you. (And are happy to do so.)
Top

Hmm... can you connect with other Steam players? That would be great.
Top
Post Reply
15 posts • Page 1 of 1