Challenge: Hide Behind Me

I tried to abuse flamers, but didn't work out.

Machine gunner cyborgs saved me in the end... But enemy flamers were very close to breaking through...
Top

How did you deal with VTOLs?
Top

Turned out (and which I did not anticipate) that lancer cyborgs had VTOLs for breakfast. From 1.1 I knew scourge cyborgs could sometimes shoot down a plane... but clearly lancer /scourge cyb AA has improved a LOT...
Top

icyflames wrote:Turned out (and which I did not anticipate) that lancer cyborgs had VTOLs for breakfast. From 1.1 I knew scourge cyborgs could sometimes shoot down a plane... but clearly lancer /scourge cyb AA has improved a LOT...

Here's a list of major things that have changed since 1.10:

- Lancers and cannons no longer have the same damage type: Lancers are now ANTI TANK, while cannons are ALL ROUNDER
- ANTI TANK weapons do far less damage to cyborgs and hard structures than lancers used to (lancers were overpowered)
- ALL ROUNDER weapons do more damage to hard structures than cannons used to
- Flamers do lots more damage (flamers were useless in 1.10)
- New weapon: Seraph Missile Array; replaced Angel Missile. A short-range missile array similar to the Mini-Rocket Array (implemented to make up for the fact that Scourge is now much weaker against cyborgs and hard structures)
- All weapons that can hit both air and ground are now actually effective at hitting air (why have the ability if it's worthless?)
- Overhauled weapon: Plasma Cannon; now a long-range cannon weapon (PC was useless in 1.10)
- Flashlight and Pulse Laser can hit air now (makes them more attractive compared to missiles/rails)
- Heavy Laser has the highest ground direct-fire range in the game now (HL was useless in 1.10)

- Cannons do more damage
- Mortars do more damage to hard structures
- Lancers do less damage, but now upgrades actually affect them, which makes them much more powerful
Top

I did this map yesterday which took me 3 hours exactly — without any save/load and time strething. I did not attack hardly in late game though — I think it could take 2:30 or such.

Actually your allies here can not protect themselves from attacks other than small harrassment from opponent so it is necessary to build defences for them. So after rushing with 2 starting trucks downцфквы and taking out the opponent's base with MG bunkers I just set heavy defences up: for my new base in the south, for the upper-right ally and for the center. They must have both AP and AT weapons as AI attacks you with tanks or swarms of lancer cyborgs. I did not bother do build AR defence type though — only lancers and MG bunkers. Then just forcing the research and keeping the defences up until you have howitzers etc. to finish the opponents off. You must have howitzers sooner than your opponents or you defences will not last long under their artillery fire.

As for countering VTOL attacks — you should have researched the first AA weapon and its emplacement before first VTOL attack on you and build AA defences as soon as first enemy VTOL attacks you or even sooner. I have had researched the AA defences by the time I finish taking down the first AI with a rush.
At first AI attacks with small groups of VTOLS (1-3) and if you build AA defences in time (4-6 AA emplacements per base are enough for me) these numbers will not get high. Just remember that it is also for you to protect your allies from VTOL attacks — the AI just does not build enough AA guns.
Top

Here's my best result with 2.3.7: around 1:30 total. Thermite bomb Scorpion VTOLs as a primary weapon. Several savegames and time slowdowns.

Apart from VTOLs, i built around 10 lancer borgs at some point to protect my yellow friend (even though he died later anyway

) before i had VTOLs and as some help to my hurricane AA emplacements, so i sold them when i switched to whirlwind. So most of the time whirlwinds were protecting my base from air attacks, and i walled in the entrances and bombed incoming tanks; when i was free from defending my base, i attacked some enemy base, with the aim of destroying all factories and trucks. In the mid-game, a single bomb destroys a borg factory or AA emplacement, and two or three are usually enough to blow up a fully-upgraded factory, but be patient; it takes some time for it to burn down. Hint: don't bomb anything else, because bots only build AA somewhere when you bomb there; try to disable every enemy base on the first run, so that they had no time to build AA. When you bomb, slow down the game to 0.3, so that you can use every bomb effectively. I end up having just 3 oil derricks most of the time, even though i manage to take 12 of them at the beginning.

I hope you see how flawish is my strategy

Feel free to beat it in 1 hour 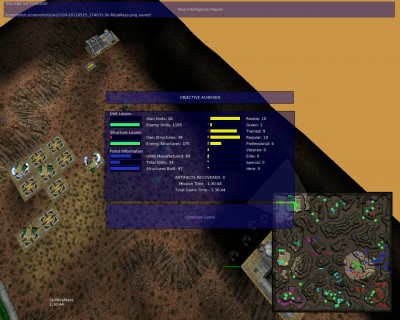 I was able to beat Hide Behind Me after /a lot/ of trial and error. (I'm not a very good player yet.) This is the only strategy that worked for me:

1. Very quickly (immediately) build as many trucks as you can and use them to /simultaneously/ take over the two enemy bases in the closest corners. Build as many MG bunkers as you can, as quickly as you can, /inside/ of each base. Don't worry about research yet because you'll need all the energy for the bunkers.
2. Once the bases are cleared, consolidate immediately for energy. Get derricks on the four energy locations at each base, and build the appropriate number of power plants.
3. Go into defense and research mode. Keep your research focused almost exclusively on items that improve research speed and improve energy production. Remember, your allies are doing research as well, and you share their results. For defense, lancer hard points and mini rocket battery emplacements are good. Beware of defensive structures like Mortars that do friendly splash damage.
4. Eventually try to get VTOLS with cluster/phosphor bombs, and use them to destroy enemy derricks. This will slow the enemies research and manufacturing down, allowing you to catch up.
5. Capture another base closest to one of the two previous ones you have captured. Divert resources away from research and build an armada of about 15 heavy tank vehicles (cannons and assault guns) and storm in, building repair facilities close by for quick regeneration. To take whatever is on the top of the plateau, you should probably set your vehicles to "Do or die", or else they will get clogged up at the ramp. After clearing the base, consolidate for energy.
6. You'll want to keep taking bases, but at this point enemy research will be too advanced for an all-out assault to be effective. Instead, use the mostly empty plateau of the last base you captured as a platform for about two dozen rotary / incendiary howitzers. Plant a wide spectrum sensor close to the enemy base and wait for them to be obliterated. Rinse and repeat for the final enemy base.

Note: Near the end, you may want to try to research the satellite up-link facility and laser command-post. In particular, watch to see if the enemy is building a laser command-post, so you can "nuke" it with your laser or bomb it to heck with your VTOLs.

Sorry, I forgot to record my completion time. To be honest, I had to play most of the game in 0.3 speed... there are just too many things going on at once.
Top

I have been playing this map for two days.


1st stratagey
Within 3-4 minutes I have 5 new oil derricks with one machine gun in addition to my main bases. And a new power generator and one upgrade on flame. I build MB on top of the hill between bot my allies. This helps support my tanks and cyborgs when defending against ground troops. I build an army of machine gun cyborgs to help with AI's defense. If I do not do this, the AI will not build defense towers to protect their two tiny entrances coming into their bases. I research and create a small army of tanks. By this time my oil derricks are being being overrun by ground troops. And the enemy has VOTLS bombing my factories. The AI are being over run, because the whole time they have been running 5-6 guys into the bases destroying any army they could have had. I tried to drop beacons, but they just say "bug off" I think they are secretly on the AI's side and are trying to kill themselves. Who builds a factory right beside someone's base when you have no army and you already have 3 factories? When I split my army to defend the AI The enemy goes directly for my base.

2nd stratagy
Take engineers and build towers around the the enemy base working your way towards the power generator. I have only been able to take out the top corner base with this method, only because I drop a becaon when I have the neck of the enemy in my grasp than the AI tells me to bug off and they send their 15 guys right into the opposite corner. (into the heart never to return...) By the time the base is taken out the AI has a ton of VOTL and ground troops. Build VOTL destroys!!

Finding this one pretty difficult, even slowed down to .33
Top

I have spent some time with this challenge and it is difficult to play it from the beginning, but the end is pretty easy.
1. Slow down to 0.33 - ctrl - and save game often
2. Ocupy 1 of enemy base - using trucks and defense structure - as soon as possible, get derricks and build energy plant, build some traps for enemy trucks and next some traps for ernemy tanks - trap = some bunkers, hardpoints, AA site
3. Speed up development - lancers, vtools with thermite bombs and whirlwind AA site and place some AA site as the trap for vtools - they are pretty stupid

4. Add some defence to your friends, because they do not use them a lot - AA sites and lancer hardpoints
5. Your friends will be not very smart - you have to help them - do not loose a friend
6. Do not be affraid of satellite attack - just build some more cheap cyborg factory at different places
7 Build as soon as possible archangel missile and vtools with thermite bomb for attack and defense
8. Destroy enemy AA turrets and satellite command post
9. Have a fun

I have just try Version: 3.1-1, but It is a big surprise, that the hardpoint is not HARDpoint in 3.1-1 and I have to say, it is good for nothing to built defense structure. 1 cyborg is able to destroy 2 hardpoints and 1 tank very easy destroy 5 of my hardpoints ? Is it O.K. ?

It is very different from previous versions.
Top 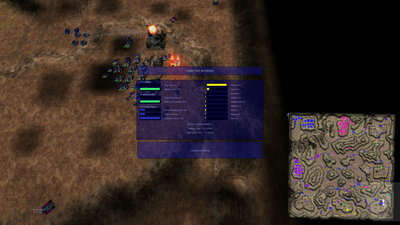