Perhaps we could think of this beautiful, well-thought-out model as a Mobile Command Center? Add a large, deployable sensor system to the top and it would fit the bill imho. It's a perfect design for that application.

Then we keep Jorzi's Medium Transport in its' intended role?

Just thinking how we can have our cake and eat it too.

Thanks for the insights on poly count, guys - those are valuable.

Holy crap I've skipped over Jorzi's model, I didn't see it until now that you've mentined it, GZT

Anyway, about the idea for the mobile command center, that would need the creation of that role in the first place. Currently, command centers "only" give you the radar (and command relay centers, well... hmmm... they sit around quite effectively. Maybe good as walls?

I always thought that a tank transporter should be really large, and of course I do acknowledge the quality of Jorzi's work, but it currently looks small and sleek - I'm aiming exactly towards a massive, solid flying thing (like an APC but for tanks

), which differs conceptually. His design does look suitable for a cyborg transport, though (in my head it looks just like a paratrooper plane

But for now, I'll take a little break from graphical artistry - I need to study HTML & CSS , which is due for yesterday

the tuts I'm currently reading are for html 4, but I must learn about them all. As for CSS, I might very well focus on CSS3 modules, yeah.

I'm really lost at all that, since all that I've studied until now was pure C, and the web-oriented subjects are only deeper into the course. But I want to study because a nice internship opportunity fell on my lap, and hell, I do need that money.

About my medium transport, it is indeed a relatively small design and the concept was that it should be able to load cyborgs or a few light vehicles in it so it is by no means in the same niche as yours (although I temporarily used it to replace the big transport in my shadermod)

Olrox wrote:Some updates on the development, using some materials to fake the main colouring layout I'm thinking about:
~Olrox

where are the guns?
Top

Oh, the turret itself is a separate model, it's really just a VTOL Heavy Machinegun mounted at the body model's respective connector, AFAIK. Much like cyborgs, the units you can produce are already "designed" and put into the manufacture list, based on available tech.

As for the weapon's position on the body:

Olrox wrote:...
The hardpoint should probably be positioned on the tail as to repel intercepting fighter craft, as they often are in real military transporters of bombers IF I recall it correctly (it just makes plain sense to me and I do recall something like that).
...

I still feel prone to position it near the tail, underneath the body, just between the flaps and the last pair of cargo bays. I'll place some eyecandy there in the conceptual renders, I promise

Anyone have anything final, that we can test in the next beta release ?
/facepalm ...Grinch stole Warzone

I have my medium transport, although it looks better with normalmapping enabled.

just to add some ideas 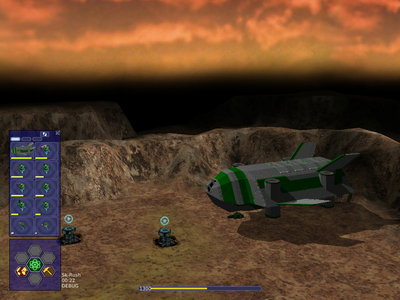 best design yet for a heavy transport. maybe replace windows with a sensor bubble? or just a flat black-ish disc pointing 45º down - behind it would be various sensors (hidden from view) used for relaying pictures back to HQ
"Dedicated to discovering Warzone artefacts, and sharing them freely for the benefit of the community."
-- https://warzone.atlassian.net/wiki/display/GO
Top 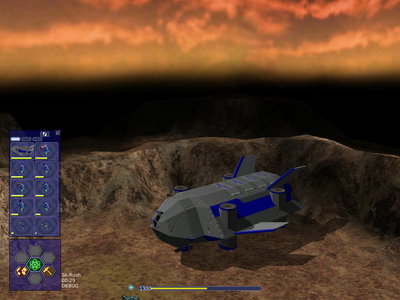 i like all 3 very different artist models. probably too much work, & silly too, but I think it would be cool to have all 3 in game and let the player choose which one they wanted to play a game with. i thought buginator said they could use several different transport models in game. maybe I remember wrong.
Top

@cumandgetit: That would be an awful lot of code for a purely cosmetic feature which many people will ignore. On the other hand, features like the one you proposed is precisely what mods are made for.
@Berg: That's actually a pretty good design, but (as always) the texture needs more work.